2010 ended with me offering to help out my friend Shannon on her quest for awesomeness at Freedom Park 24hr race on New Year's Eve. After going around a couple of the one mile loops with Shannon, I figured, I may as well enter the thing, so promptly signed up for the 12 hr race.

This would be so cool to "go across the years". What was actually cooler was taking the lead pretty much on the stroke of midnight. Yep, first place male. I ain't telling you no lies. First male, second overall. After a little while in front, I even found myself opening up a one lap gap! Holy crap this is weird.

Then the strange stuff starts to happen. Like paranoia. Best not eat - what happens if he catches me while I am having a snack? Oh no, I need the Porta John..... best make it quick... no, just keep going, next loop.... crap, I wish I had stopped last lap. It is a different set of problems when you are winning. I did keep on looking at the print outs and did see that the number 2 male was slowly catching me up - 9 minutes behind, 7 minutes behind, 3 minutes... I am being worn down. This point I have 40 miles in about 8 hours, easily on course for a 50 mile PR. Then of course I fell apart; I couldn't handle the pressure of winning. I saw he was a minute behind, and that was it. 44 laps, 43.38 miles, somewhere a little before 5 am, I checked the printout, and figured out that the number 3 male wouldn't catch me - and I stopped, happy with second, after being in the lead for 5 hours, and chatted to Jonathan Savage who was certain to win the 24hr race - he had also stopped a little before me, but he was safe in the knowledge that he had won the 24 hr race with 116 miles.

Now of course I am kicking myself, I coulda just kept going - maybe a 10 minute break, then it would be my turn to wear him down, less pressure I think. But I didn't. Oh well, second is not too shabby.
Posted by Jimbo 1 comment: 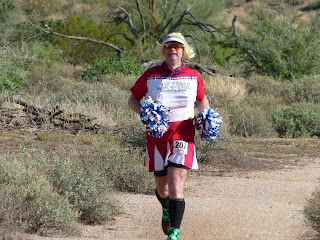