Laurel Valley. Nobody knows the distance. My garmin said 29 miles. One map I saw said 40 miles. The garmin data plotted on RunningAHEAD comes to just under 35 miles -- so, somewhere between 30 and 40 miles.... let's call it 35. There are no places on the trail to bail out -- you start, you have to finish (or turn around if you are not half-way through). There is also no aid, whatever ou need or want on the trail, you have to carry it in. There are several stream and river crossings that provide plenty of opportunities for water.

First time runners have to run as sweeps -- last through the course to make sure all the runners ahead of them are safe - which I considered to be a pleasant introduction to the trail. Ha!! I was the one "swept" though.........

So, why did I have issues?

Was it the distance? Nope -- I have done several runs of that length or longer, no, so it wasn't the distance.

Was it the hills? Nope -- Sure there were a few good climbs, both up and down. There were several flights of stairs (someone once counted 5000 apparently -- and yes, they became quite old during the second half, but not the cause of any issues).

How about the technical nature of the trails? Oh hell no, that's not it. The vast majority of th trail is not as technical as the "Red Ankle Breaker" at Jordan Lake, or Loblolly at Umstead, I run those all the time.

Well..... it couldn't be the heat and humidity could it? Don't think so, it is August, and I have done plenty of running in the heat

I know for a fact that dehydration and depletion wouldn't be the cause of any trouble, I mean, come on Jimbo, you have become dehydrated in so many races before, you have learned that lesson several times over, you surely know how to hydrate properly during a race don't you? Don't you?

You would think that eventually I would learn wouldn't you? The truth is, sometimes I am as dumb as a rock, I really am. I simply did not drink enough the first half of the race, and as I have discovered on several occasions, it is very difficult to catch up.

I got through it though. But only because I had no choice -- which was an interesting lesson in itself, you can put up with a hell of a lot of suffering if you have no choice.

I can't remember when I started running with Andrea -- Andrea was the sweep captain, and knew the course very well. I was already beginning to suffer by that time, fatigue, muscle cramps, nausea, and on some of the climbs needed to stop for a while to let my heart rate go down.

My lowest point of the race was "Horse Pasture" a beautiful river about 20 miles ino the run. I was overheated and dehydrated and I needed to slam as much fluid as I could stomach, and I needed to cool down. Laying in the river would be the quickest way to accomplish that. Climbing into the fast moving stream, my left calf muscle totally cramped up. Agony. The sort of pain that caused me to cry out. Without a doubt the most painful experience I have had during a run. I have had cramps before -- but the intensity of this dwarfed every single one of them. It probably didn't last any more than a minute, but holy crap it was a long minute before the pain subsided enough to stop. I would have quit at that point if I could. I couldn't. Suck it up buttercup, there is only one way out......

Awesome Andrea was awesome in her awesomeness. Refilling my hydration pack (she had this really neat hand pump/filter which made sure the water was safe to drink), and just making sure I was ok (and taking a couple of pictures too), while I was cooling off.

I'm not sure how long I spent soaking -- maybe 20 minutes or so? I dunno, I didn't care either. I did eventually cool off and start to feel somewhat better. 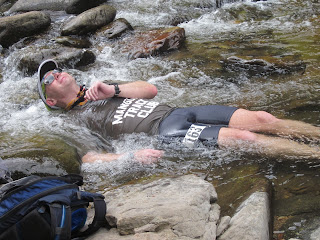 The rest of the race went by in a blur really -- here is what I remember, I was slow. I was tired, and I felt like shit. I just wanted to finish. Those were the negatives.... the company and conversation were fantastic and kept me going and kept my mind off of the negatives for the most part. Thanks Andrea, I owe ya.

The course was wonderfully scenic too. Usually I like that, and it adds to the enjoyment. Sadly I didn't care too much (as you can probably tell by my lack of photographs), and that is unfortunate. Guess (like the idiot I am) I will just have to go back next year........................


(Check back in a little while for more pictures)

A huge Thank you to Claude for putting the race together -- despite my suffering, I really did have a good time, really. Honest.
Posted by Jimbo 4 comments:

As a side note, here is Mandy's fee schedule:

I will second what Jim said about everyone getting along like we were all old friends. It was amazing…. And our team did laugh a lot. About everything!

It was amazing to be a part of something so much bigger than myself. Being a member of the crew, with all of you, was totally fun. We all brought something different to the table, but we were able to accomplish the goal Meri getting to the end.
Posted by Jimbo No comments: