My friend Stephanie was tired of having to travel at least a couple of hours from Carolina Beach to any races and runs she wanted to do.

So she decided to put on a race in her home town.

The First Annual Prancing Unicorn and Polydactyl Kitten Fat Ass Race was born. I just had participate – just because of the name if nothing else. Especially when I found out I could purchase a t-shirt. Who could possibly resist a raspberry colored t-shirt with kittens and unicorns on it? Not me

Steph mapped out a 50k course, sprayed green arrows on the course, dropped a few gallon jugs of water around. There you have it. Now, I was not sure how far I wanted to run – I brought the pups, so really didn’t want to run too much especially as warm weather was predicted. Certainly less than 20 miles.

In the end, I ran with my friend Blanca – we ran an easy 13.1 and figured that would do. 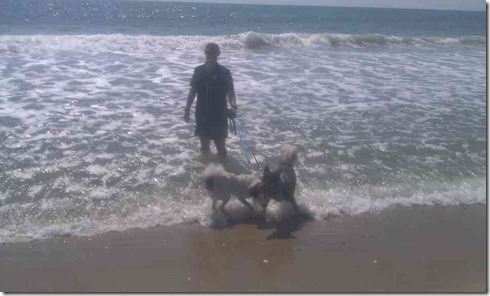 Beer and cheeseburgers wrapped up the day nicely at Carolina Beach State Park. 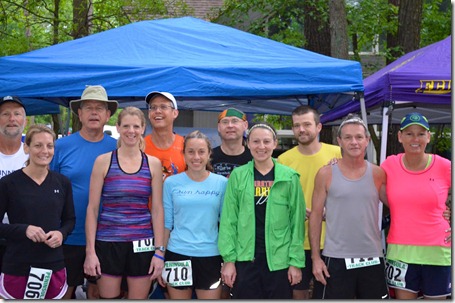 Remember this race from last year? 2011 race report The 12 members of Team Awesome set a course record of  802.5  miles. Obviously, the mission this year was to beat it.

But let’s go back a few days. On the Monday evening  before the race, I was trying to "forge” a new trail in my back yard. With a lot of switchbacks, and some back tracking (and a little trespassing onto a neighboring unoccupied/undeveloped property) – I can get a mile, cool eh?. Anyway, a little earlier in the day, I had had a fantastic lunch time run at Umstead, and like an idiot, I posted on Facebook how awesome that run was. DOH! Talk about tempting Murphy. Well, Murphy did duly arrive and while bushwhacking later in the day, I managed to trip over something, and re-injuring my Achilles tendon again. Crap. In an effort to heal in time for the race, I did not run another step until I toed the line in Hampton VA on Saturday morning.

I always want to shoot for 100 miles in these 24 hour races, but set a relatively doable goal of 75 miles – 100 miles being the “WTF? LOL goal”. As soon as I started, I pretty much knew that my Achilles wasn’t going to let that happen, and the goal was realigned to beat last year’s total of 57.25 miles.

I also wanted to continue my experiments with “The Method of Doom”, in other words, even slow steady splits, and see how long I could maintain it. I settled on a time of 52 minutes for the 3.75 mile loop. If I get in early, instead of “banking” the time, I would sit down and rest and take care of any issues or eat/drink etc. This worked perfectly for 9 laps, and on lap 10, my pace backed off, likely due to the heat of the day. Hindsight being 20/20, I would perhaps slowed my pace earlier – or even started off with say 55 minutes per lap. Still lessons were learned. Throughout the day, the Achilles gave me grief – it didn’t get worse, but was ever present. After 10 laps – I would just plod through a loop, plenty of walking, and then rest up, run another lap.

During the night it rained – a cold rain, and to be perfectly frank, I don’t like being cold and wet – by that time, I had 56.25 miles, I was sore, and decided to call it a day, with a plan to run a mile in the morning in order to get my total to at least equal last years total. FAIL. The cold rain continued in to the morning, ad I really had no inkling to do even just one more mile – I was sore and tired.

Thankfully though, Tom did do one mile. We beat our previous record my just 3/4 mile. So, YEAH! A win and a course record for Team Awesome.

There was a whole ton of Awesomeness for Team Awesome. Kati, Ladonna and Mike – first time Ultras with 52.5, 63.75 and 75 miles respectively (I think 26.2 was the furthest they had ever run). How about Frank? – returning from hip surgery a few months ago, and hasn’t ran more than 11 miles since – well Frank ran 50! Cheryl – first place woman with 100 miles. Awesome. Alanna, recovering from 100 miles at Umstead ran 52.5.  My friend, mentor, part time therapist and unpaid coach Shannon, despite getting pretty sick early, still put up 67.5 miles. Tom did one more mile than his total last year – 83.5. John, Matt and Tony all put in good shifts with 67.5, 75, and 60 miles.

So much fun, good to catch up with friends and make new ones! 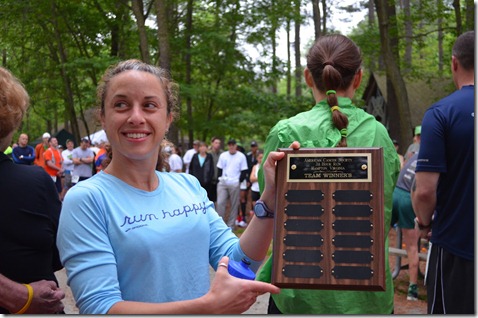 It always stuns me how many people stumble onto these pages. Some even come back for more – many even leave comments (125 followers – WTF? LOL)

It occurred to me that many of you dear readers also have blogs, websites etc. etc.  I do follow quite a few blogs – especially if you have left comments, but I would bet that there are many I don’t even know about, because you may not be “commenters”, but more “readers” – so  I may never know of the existence of your site, and I could be missing out on good stuff. And I like good stuff.

So, here is a request: If you read this page, and you have a blog or website, and you think it is at least somewhat relevant, why not go ahead and comment below, with a link and a description? I would be happy to check out your site and I probably need to update my “Blog Roll” anyway.

Thanks in advance from the SoFarFromNormal  Blog Team

Getting my rocks off at Umstead

With a title like “getting my rocks off” I had perhaps explain…….

A few weeks ago, my friend Lauren and I were doing a training run at Umstead – I did 20 miles, Lauren did one more lap for 30. As we ran, we had a conversation about the 100 mile race – we had an idea about how we could symbolize each of the 8 laps. So, when I was helping out at the Ellerbe Volunteer Marathon, I picked up 16 quartz rocks at “The Dog Pen” – the place where the Mangum Track Club Shirt Runs end. On Wednesday before the race, I placed two piles of 8 rocks next to a tree at the top of “Effing Hill”. One pile for Lauren, one for me. Lauren got all of her rocks off, she threw one into the woods each time she passed the spot – me, well I brought a rock back to my truck each time I passed the pile. But I didn’t get my rocks off. There are three rocks left in my pile. Bollox.

Here’s what happened – four solid 12.5 mile loops, all pretty evenly split, which got me in for 50 miles at around 10:50 (it’s very nice to have the Western States qualifier in the bag already). The fifth loop started off with a break before heading out with my pacer Deanna (awesome pacer by the way). It was always going to be a slower loop – I anticipated that. It’s tough to get going after the extended rest, plus it takes a while to get used to running in the dark. Plus of course I had already done a hard 50, and the fatigue kicks in. Yeah, I expected all that. What I didn’t expect were the sharp pains in my Achilles when going up hills that started just after the half way point. As the lap progressed the pain got worse. I am not sure when I started to worry – probably with a couple of miles to go, I probably expressed some doubt to Deanna while going up Cemetery Hill with a mile or so to go. I definitely decided I was going to see the medics at the main s/f area.

Guido took a look at my leg, detected some inflammation and raised temperature around my Achilles area, and told me that the weird tingling I felt in my ankle when I touched my calf pointed towards an Achilles strain –  he did additional tests and suspected that it was not likely a tear. He told me that it was up to me if I continued – but it wouldn’t improve by running, and that I haven’t got a tear. Yet. And I should look at the time left, and would I be able to finish if I limped through the remaining loops?  And “did I know how long a tear takes to heal compared to a strain”? I did take it as a hint, but it seemed pretty certain he wasn’t going to “call it a day” on my behalf.

Ice for 20 minutes, then a test jog. I could walk slowly with not much pain – but up hills and actually running gave me those shooting pains.

But remember this? It was a very fast 5k – well the day after that, I had Achilles pain – to quote: “I noticed a minor tweak in my left Achilles tendon” – but decided on “sucking it up buttercup” and ran through it. For quite a few days. I really can be a dumb ass some times. In all fairness, I did run 57 or so miles with no issues, but I guess it hadn’t healed properly.

As they say, you can learn a lot from a DNF, so, what did I learn?

So, until next year I guess. If I can get in.

In the meantime, what do with those 3 rocks left all alone in a pile at the top of Effing Hill.