When Shannon McGinn approached me towards the end of last year about putting a relay team together, initially I declined; you see the race coincided with Zane Grey 50, and there is a piece of my soul on that course after my DNF a year ago. Eventually after tons of pressure, I decided that if I didn’t get my name pulled in  Western States lottery, then I would forego Zane Grey and participate in the “VA 24 hour race for cancer”.
My name wasn’t pulled out of the electronic Gu bucket, so the next task was to help put together “Team Awesome”
My plan was to ask as many people as possible, and then hope 12 people showed up on race day. Shannon’s plan was to only ask people who would fit in, and “get” the Team Awesome concept. Shannon of course was right, and we managed to find a great group of 12 people, all talented runners, all with fabulous personalities.
Team Awesome:
Shannon, Frank, Jonathan, Alanna, Sabrina, David, Jessi, Tom, Ray, Amy, Cheryl and of course me.

Jimbo Alanna and Super Dave
Charles, Sidney and Todd were our crew, along with Cheryl’s family who showed up with tons of food (honestly, I have never seen that many cheeseburgers)
The race is billed as a fundraiser for the American Cancer Society, and it is fitting that our team had two survivors, two women who inspire me with their cancer-ass-kicking prowess and their overall Awesomeness, Shannon and Alanna. Just as a side note, like most people, I know people who have been affected by this disease – but in my case, the largest demographic that I know personally that have fought cancer, is young adult women -- not sure if that says anything about the disease or perhaps more about the people I am friends with. 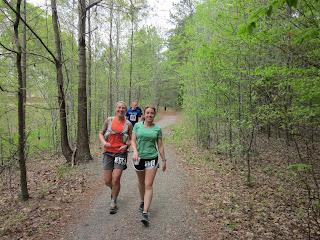 Shannon and Alanna -- Ass Kicking Awesomeness
The goal:
Team win, and course record. Stretch goal of 1000 miles
Personal goal:
100 miles (WTF LOL) – Yep, I keep persisting with this.
So, how did it go?
Less than two miles into the race, I felt a “pop” in the calf muscle that bothered me at Umstead. At Umstead, I decided to “suck it up”, and although I stopped at 50 miles, it wasn’t because of the calf. This time however, I had a different attitude – it is obviously an injury, that has reoccurred, and I am therefore not going to push it. I pretty much threw away my 100 mile goal there and then, and shifted my focus to “have fun”.
And have fun I did. I thoroughly enjoyed running with Alanna, Dave, Shannon, Frank, Cheryl and Amy, I thoroughly enjoyed getting pampered by Charles, Todd and Sidney at the aidstation. (Fried chicken. Yum) I thoroughly enjoyed watching Dave make a “pizza and kettle chip cheeseburger” (so much so that I made one myself – yep it was awesome). I thoroughly enjoyed hanging out in the aidstation with the rest of the team; I thoroughly enjoyed my nap in the Explorer. It was fun. All of it, it was fun. 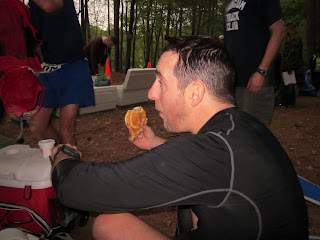 Dave and his "Awesome Burger"
Then the storm hit. And it hit. The weather had been talked about all day. A line of storms was coming across the southeast, and we had already learned of storms and tornadoes in my hometown. (At the time, I didn’t know how bad the storms in Sanford were, but take a look at this slide show, http://www.flickr.com/photos/wesley74/sets/72157626388703997/show/  -- this is not the way I wanted my town to become famous. These are the kind of pictures you see all the time, but tend to ignore. Until it is this close to home.) I do not think I have ever been in such a downpour when the storms hit talk about an absolute drenching. Lots of lightning, thunder and rain, lots and lots of rain. The trails became streams, then ankle deep rivers almost instantaneously. 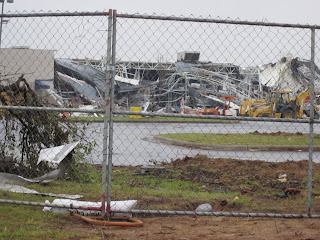 Pictures of the Lowes in Sanford were beamed across the world -- I took this
6 days after the tornado. Having seen the devastation I am absolutely
amazed that everyone walked out of the store alive.
I have never seen anything like it, incredible. Just incredible.
When the rains hit, I suspect that we were maybe 1.5 miles out from the start finish – with about a mile to go, Alanna and I met up with Frank and we just strolled to the finish. Frank turned around and headed out for another loop. Huh? He was having too much fun dancing in the puddles. Not me, I went to my truck, wrapped up in a snuggy and waited out the storm. 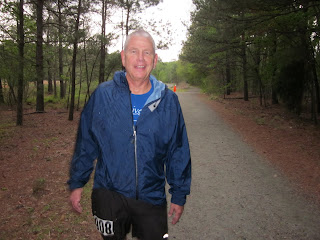 Frank. Being awesome as usual.
Once it had passed, I had one more loop to go to make it to 50 miles, so Amy and I headed out for my last loop. After I had the 50 mark, Amy needed one more to make it to 50, so I kept her company for her last loop, so clocked up a total of 56.25 miles. The sky had cleared, and it was actually a terrific night for running, but I was tired, hurting and tired. So I had another cheeseburger and had a nap for a few hours. 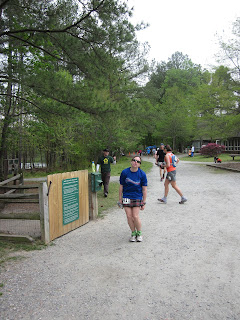 Amy.  Great company for my last two laps. Not sure what
she is doing in this picture though. Maybe she needs the bathroom.
Once I was awake, I found out Shannon had got first placed female! Yay, congrats to Shannon. Sabrina was second female, cool, 1 and 2!
I walked to the “cones” to get one more mile, just because, (it is actually kinda fun being on the course when a 24 hr race ends). Total mileage is 57.25.
Team Awesome total was over 800 miles, and given the injuries, storms, that wasn’t too shabby at all – we also smashed the course record by over 200 miles. Everyone made it over 50, but more importantly, everyone was simply awesome. What fun. 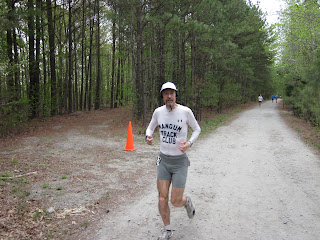 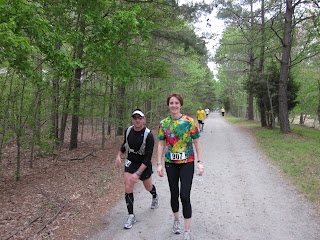 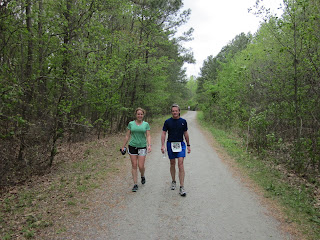 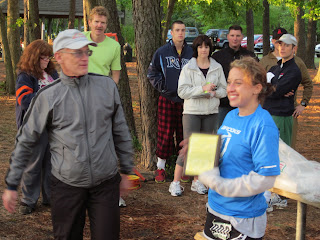 Sabrina. Jessi, Jon and Tom at the start. I was at the back (of course)
(Photo: Ray K) 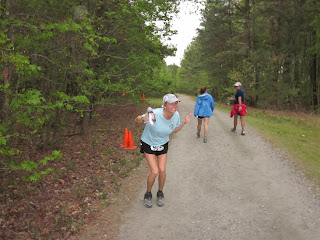 Cheryl -- I guess she was listening to some disco. Or something. ;-) 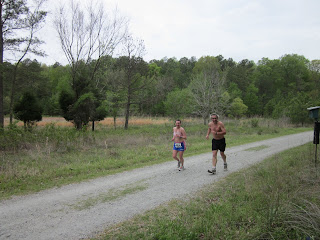 Ray -- flirting as usual. Apparently he has done a few races like this before.
Posted by Jimbo