Wow. I am famous

The Price of fame
I guess I am not cut out to be a “TV star” or actor. I feel very uncomfortable when being filmed, and even more uncomfortable watching the end result. “Do I really sound like that?”. “Wish I had remembered to shave”. “Really bad timing for a cold sore” and of course “I have a great face for radio” etc. etc.
Barbara Zellweger, a student at UNC used the Umstead 100 as a project for her Multimedia Story. She part of the project was to make a mini documentary in the Umstead 100. Frank Amy and I were the subject matter. I was interviewed after the Umstead trail marathon in March.
Here is a link to the finished movie, she really did a great job. (Although I feel weird and uncomfortable watching it, it is kinda cool though!) Enjoy, and also check out the rest of her project.
http://bzellweger.com/umstead100/
Meet the Runners from Barbara Zellweger on Vimeo. 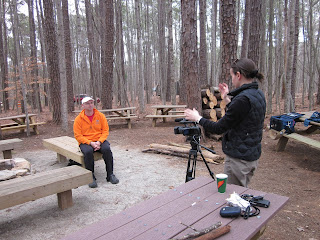 The Making of.............
Photo by Aubrey (runner-of-cute-downhill-marathons) Blanda
Shirt Run
April 2009, during my first Ultra, Lap 4. I chatted to a guy by the name of Jimmy. He asked me where I was from, and then proudly showed me the shirt he was wearing; it said “Mangum Track Club”. After that 50 miler, I remembered to Google the club and found out the only way to join was by doing a shirt run, a 15 mile point to point run from Mangum NC (basically a crossroads) to another intersection (called the “Dog Pen”, because there is a dog pen there). And thus began my journey to craziness.  I love everything about MTC, and becoming a member is the single most beneficial thing I have done for my running career. (“Career”, WTF LOL).
The races they put on are fantastic, the people are wonderful – the whole thing is about promoting running, and having fun while doing it. Wilbur and Sarah are canine members, and they get their own dog tags when they complete the shirt run. I get a thrill when friends become new members. Welcome to the club Amy, Amy and Blanca.
I skipped this past weekend’s shirt run, because of my calf injury – instead though, I acted as roving aid and photographer. 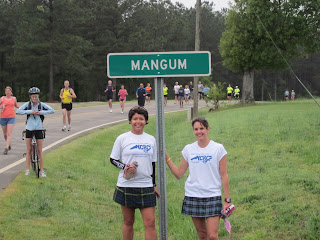 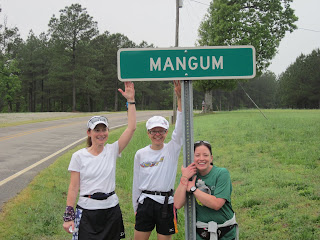 Injury update
As I mentioned in the race report for the 24 Hour Run for Cancer,  I managed to strain my calf muscle – not severely by any stretch of the imagination, but enough to tell me I needed to rest and rehab for at least a week.  Lots of icing, aggressive massage with the foam roller and The Stick. Any exercise was low impact and slow, designed to “gently stretch” the muscle while working it. It all seemed to work, and it really did feel better. So I figured I would hit the trails at Jordan Lake to see how I fared. I chose the “Blue Ankle Breaker” – a short 2.75 mile loop with plenty of short hills, turns, roots etc. As the run wore on, I decided to push a little. The calf felt fine. It also happened to be my first run of the year that hit 90o, it made me realize that I really do prefer to run in the heat. So I think this week will involve some more jogging, mainly on hotel treadmills, always easy pace, gradually getting longer. If I come through this week with no reoccurrence, then I will toe the line at the Enoree Passage 40 miler on Saturday. Even a slight twinge though, and I will volunteer instead.
Mission Tahoe.
I have decided that yesterday’s trail run was the beginning of my training for TRT 100 in July. Every run I do between now and then is going to be all about gearing myself up and training for Tahoe. As I write, there is 82 days left. It is all about the Buckle. I look forward to earning it. 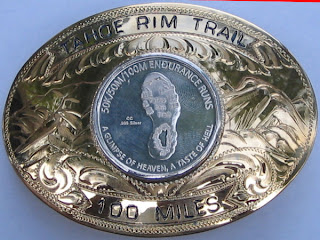