This was my first 24 hour event. I heard it said “it’s like a tailgate party with some running involved”. Guess it was time to figure out if that was true…

My kids and I headed out to Rockingham with the camper mid-day Friday. Just like with the Bethel Hill Midnight Boogie, we were one of the first people to arrive. We soon found the camping area at the lodge and set up camp. It was not long before many other runners began to arrive. Andy showed up later on that evening. He had plenty of time to meet some new friends and we chilled out for a while.

The plan was to run as many as I could. Ultimate goal of 100 – thought I would do my best to keep pace with my running partner Joey Anderson. I realized that was a long shot with my mileage being way down this summer. If I couldn’t do that, 75 sounded reasonable. I think anything longer than my farthest distance of 50 miles I would be happy with.

Woke up Saturday morning to the sound of rain. Checked the radar. It indicated that most of the significant rain was going to stay away from Hinson Lake. When I stepped out of the camper, I was surprised to see how many tents had popped up during the night. I should have gotten a picture of the tent farm. Hindsight, right? Anyway, gathered up my gear and my family and I walked to our spot near the start.

The plan was to start slow – walk most of the first lap with my family. That is pretty much what we did, except for Drew who took off. Ashlynn and Kayla walked and ran with us the first lap, then they hung out at our aid station while Andy and I went out again. No sooner were had we started our second lap than Mike Morton lapped us on his 3rd lap. Wow, was this guy going out too fast or is he just that good? Only time will tell. Drew stayed a lap ahead of us for a long time. After 5 laps around he earned a number, a shirt and he checked in just like the other runners were doing. He was so happy! He had not trained at all for this. I had no idea he was going to run this fast or this far. I brought his fishing pole thinking he was going to be fishing all day, but he didn’t want to. Andy thought he might run a 5K with me, but one lap led to another and he had completed 15 miles before taking a break and eating breakfast for lunch. It was then that Kayla took a few laps with me, and she earned her number and shirt.

The afternoon went on with us logging mile after mile. Sometimes I was with family, other times I was with friends. It was not often I was alone. It seemed there was always someone around to share a few steps with along the way. Kayla and Drew were out running laps throughout the day some with me, with my friends. They were having a great time with it.

Despite taking changing my socks every 8-10 miles and wiping the grit off my feet with baby wipes, I began to realize I was getting hot spots on my feet. Amy Schimmel came over, taped up a couple of spots, and provided some relief.

Andy was 2 laps away from a marathon. Halfway through his first lap his knee ‘gave out’. He kept on, injury and all, he completed his first (and he says last) marathon.

I kept going. Around dusk I had some dinner - PIZZA - and Drew walked with me 2 more laps and finished his first 50K. What an amazing feat for an 8 year old with simply a desire to run, and no training. A lot of thanks goes to everyone who cheered him on throughout the day. I know that is what kept him going. What an awesome running family!

My friend Joey decided to call it a night after 50 miles. Andy, Ashlynn and Drew called it a night and went up to bed. Kayla stayed around at the aid station helping out the runners throughout the evening and into the night.

I spent the next few hours logging some slower miles with good friends. As the night wore on my run/walk was turning into more walk than run until it was just a slow walk all by myself. I realized my idea of 75 was getting more out of reach as the pain in my feet increased with every lap. When I realized 62 miles (100K) was just laps away I knew it was do-able. Painful, but not out of reach. Kayla was at the aid station each time I came around. She had already completed her half marathon and was thrilled to have done so. She wondered how many laps I had left and I told her 2, and she said I want to do those with you. Kayla walked with me the 2 hardest laps of my day. We finished in the wee hours of Sunday morning with tears and hugs from sweaty friends. We slowly walked back to the camper where we passed out for a few hours.

7:00 am the kids and I got up and I limped down to see how many people were still on their feet after 23+ hours. There were many. Mike Morton was still going just as fast as he was at lap one. He was lapping me once, sometimes twice a lap during the night. It was amazing to watch him run as strong as he did all through the day and night.

24 hours later Mike Morton won the race with a 2nd best American finish of 163.9 miles in 24 hours. What an amazing finish! 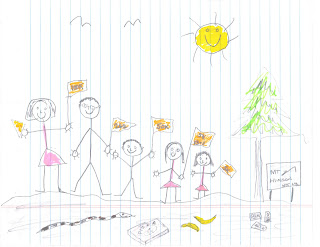 I know there is a lot I need to figure out before U100 next April. The main one is how to keep blisters from forming and to keep the swelling in my feet down. I also ended up with a heat rash on my feet, but I am thinking that should be a non issue at U100.

Hinson Lake was like a tailgate party with my running family with a little bit of running involved. OK, maybe a lot of running involved - thousands of miles logged on that path by few hundred runners. I really enjoyed watching facebook the week after the run, looking at everyone’s pictures, and watching all the friendships continue that started by meeting at Hinson.