Respecting the Hell out of Javelina Jundred.

Javelina Jundred is a 101.4 mile run in the Arizona desert. The scenery is absolutely spectacular – if you like deserts (I do). The ancient Saguaro towering over you as you run, the mountains in the distance. Plus the wonderful support from the volunteers. It is billed as a Jalloween party – many wearing costume.  (All the “J’s” are silent by the way). 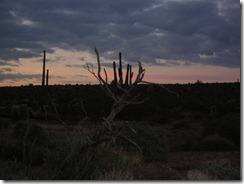 The approach of sunrise shortly after the start 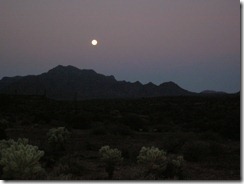 The moon getting ready to set 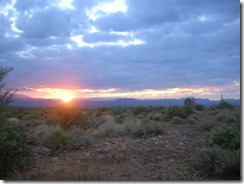 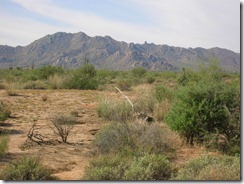 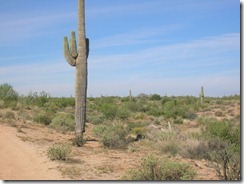 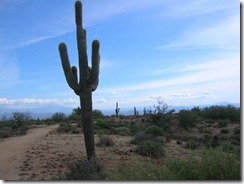 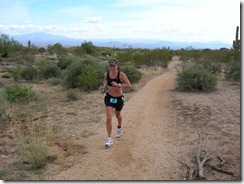 Female winner and second overall Jamie Donaldson. After the race, Jamie contacted me and asked if this photo could be used by Hammer Nutrition in one of their ads. It was published in Ultrarunning Magazine a month or two later 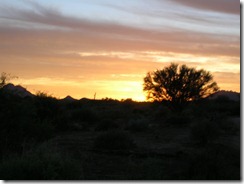 Spectacular sunset. Hope that this year I will get to see a second sunrise.
I bolloxed up at Javelina last year. The curse of most endurance runners was probably my main downfall – yep, going out too fast. Plus, I could also blame the wig – I am not used to running with hair. 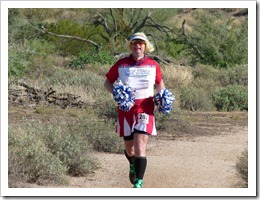 The course is actually quite deceptive. Flat at the start, and then a very gradual incline for about 5 miles, then a 5 mile drop – barely noticeable. Not by any means do these climbs have any significant elevation gain. You barely notice it – and that is the problem. You see, you start slow being smart, and then somewhere around half-way through the loop you suddenly feel great, the pace picks up – but… that is gravity doing that. Meanwhile as the pace is high, sudden thoughts of potentially hitting sub 24 come at you. After 15 miles, you arrive at Javelina Jeadquarters feeling great, looking forward to the big sub-24 buckle. They run “washing machine loops” at Javelina, so you head out the way you have just come – back up the hill you just flew down – except, you try and keep the pace the same as when you were coming down, plus of course it is getting hotter.
Last year, by the time I had finished the second lap, I was pretty tired and pretty badly dehydrated. I was actually down about 8 pounds. To be honest, I never really recovered from that – even though I sat down for 30 minutes or so to get some fluids in me.
I did do two more laps – but really struggled through them both, eventually dropping at 100k. There were some of those moments where you feel like you are moving well, but soon realize it just took 25 minutes for a mile.
As I type, I am sitting on a plane, listening to music. Freebird by Lynnrd Skynnrd just came on. It brought back a memory of last year – after I had decided to drop, and I had about 2 miles to go to the S/F area, the very same song came on – I cranked the volume up and sang my heart out while playing my air guitar. Thankfully there wasn’t anybody around to hear me (and no doubt it scared the rattlesnakes and coyotes away. As I sit on the plane – I did turn the volume up, but no singing.


Reliving that memory has just given me an idea  - I am going to ask as many people as I can to recommend a song – I will make a “friend” playlist, and play through the list when I need perking up

This year, I won’t be stupid, this year no dreams of sub 24 or anything so ridiculous will enter my head. I will remember the hills are there, and I will be smart. I will not wear a wig. I will not bollox Javelina.
Posted by Jimbo