It's madness I tells ya, madness

The brainchild of Doug “The Boogieman” Dawkins. Simple in concept, but the execution….. ugh!

Basically, the principle was 10 x 5k’s each 5k starts on the hour every hour. The times in each 5k are added and your accumulative time is your time for the 50k

You see, run it fast, you get a nice rest, and an opportunity to cool down. Run it slow, and perhaps you don’t overheat in the first place. Being as I knew I was never going to win (WTF? LOL! – No shit Sherlock), I elected to take something between the two. So an easy 5k, and aim for around 15-20 minute break.

The ultra-puppies came along for a run, so I obviously didn’t want those guys to overheat, but at the same time, I wanted them to cool off between loops,

The challenge of this was two-fold, the heat, and the course. It was going to be in the 90’s, and the course – oh my, the course. Sand. In some places, ankle deep. Not real hilly (although the small inclines that were there really did get steeper each loop). The lack of meaningful shade added to the difficulty.

But I liked it! 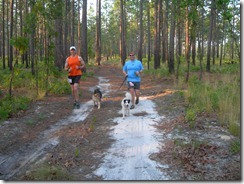 Jimbo, Tim, and the Ultra-Puppies early on 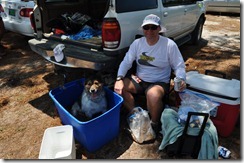 Cooling off between laps

The 8th lap – Wilbur wanted to stop under the shade a couple of times. My rule when I run with the pups is that they must set the pace – especially in the heat. I made the decision to sit them out for the 9th lap, and I ran it on my own.

We did all come together for the “glory lap though”.  We walked the whole lap, and I came in DFL (YAY!!) for that last 5k.

So, final thoughts? I enjoyed the run – the format was challenging mentally, but once I locked it into my head that it was a 50k with extra long aid stops, rather than 10 x 5k’s it was not too bad to wrap my head around.

Here’s a thought – if somebody was particularly evil, they would come up with a similar concept for  a race, but perhaps reduce the time allowed for each lap by, ooooh, say a minute for a 1.6 mile trail loop in August………….