As the race continued, and our routines established, Hung was moving along nicely it was time for some pacing. Dave paced for a few miles at first, then I took over. I think it was about 2 or 3 pm. Certainly it was hot. It wasn't pacing, exactly, we had to follow behind the runner, carrying a spraybottle filled with ice water and keep him wet so that evaporative cooling could take place. 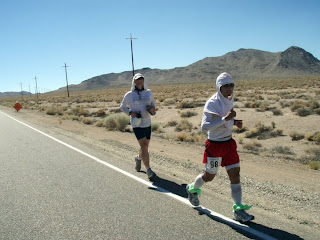 Pacing
I think at this point, I paced for an hour or two. The next stint was after Townes Pass, which we hit somewhere arond midnight. It started off with a 10 mile downhill run. Can anyone say fried quads? I managed to find the only rock on road and rolled my ankle pretty badly. Visions of finding an ER filled my mind as I honestly thought I may have broken my foot, there was certainly a loud pop when it rolled. I told Hung to keep running while I limped for a few minutes. The pain did ease off as I kept moving, so it seemed just a slightly worse than typical ankle roll. I paced around 20 miles this time, which included the bulk of the climb to Father Crowley's point.

Hung struggled through the night, it was a hotter night than last year and perhaps he had also put in too much effort during the heat of the day. Either way, we just kept him moving. Approaching the summit though, he was done and needed a rest. I think he slept for about 30 minutes while I repaired a blister. We were parked by a gorgeous canyon, and the sunrise was quite spectacular. 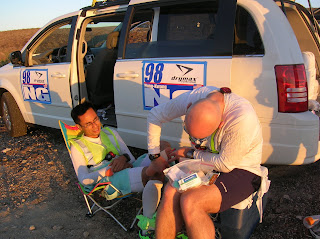 Dr. Jimbo works on a blister 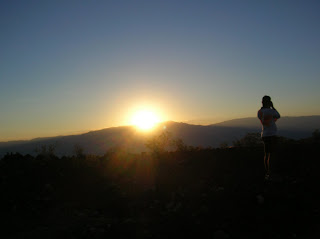 Once rested, Hung started running again, and for the next few hours, 10 minute naps became quite common (maybe once an hour). These little breaks did Hung wonders and he started picking up the pace.

Around 100 miles, Hung really picked it up - a combination of starting to wear the ice water soaked hood again plus probably a sense of "let's just get this thing done". No one was pacing, we crewed at half mile intervals, and time was starting to go by quickly. This second wind lasted all the way to Lone Pine at mile 122. I got a cheeseburger and a chocolate milkshake. Yum.

As we climbed out of Lone Pine to the finish, we had a cheerleading squad following us up. Amy Palmeiro-Winters (who had unfortunately dropped earlier) and her awesome "Girl-Power" crew (aka - The Pink Chicks" were a lot of fun, and certainly helped make time fly for the last few miles. 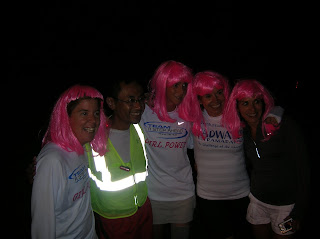 Hung and the Pink Chicks
Finally, after 35:56:xx, Hung was finished. The whole thing was an amazing experience, and one that I look forward to repeating. Would I want to run it? Not sure, there is a little piece of me that would, although the costs are scary. I know for a fact that if I was running, I would be more than happy to have "Team Hung" as a crew. Considering none of us really knew one another at the start of all of this, it is great how we all bonded, and I now have four new friends. 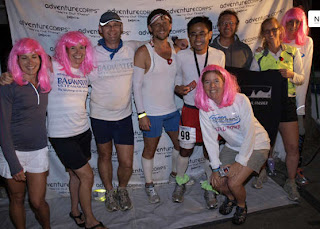