Since I have been doing the blogging thing, one thing I have noticed is that the hits to each page go up dramatically if I put the name of the race as the title. I have also noticed that if write things like “Crooked Road 24 Hour Ultra” in the body –  again more hits. Thank you Google – you’re doing the world  favor by spreading the word about this wonderful race.
On to the race – Roanoke is about 3 hours from home so it was a fairly easy journey for Tom, Amy and myself. We met up with Shannon, Dave and Tamra all the way from New Jersey – this became a partial Team Awesome reunion.

Over dinner, goals were discussed for the race next morning. 100. 100 miles being the target for Tom, Dave, Shannon and myself. Amy, just returning from a nasty injury had only been given clearance by her Doctor to run that day after a several month layoff; Amy just wanted to run some.

100 miles. 24 hours. WTF? LOL – not even So Far From Normal, as that is becoming a routine goal for me. A goal that I continually fail at….. but a common goal nonetheless.

They say life is full of surprises – but there were at least a couple of things that weren’t actually surprises at all.


Not-a-surprise #1 -  It’s December. It’s cold. With a risk of being very cold. It was. (Then why was I surprised by this? I was actually surprised that I was so surprised). IT’S DECEMBER NUMB NUTS. OF COURSE IT WILL BE COLD!
Not-a-surprise #2 – It never was a surprise,was never going to be a surprise, in fact, I would have been surprised had I been surprised. Nope, no surprise at all that Ricky and Sharon Scott would put on a great race. Ricky and Sharon run in the same circles as I do (quite literally in the case of Hinson Lake), they are often at MTC races, shirt runs, Umstead etc., so they know what ultrarunners like when it comes to a race. Yep, they did a great job – and I wasn’t surprised at all.


Back to the race – Shannon, Dave and Tamra had set up Team Awesome HQ, about 1/3 of the way around the course. The HQ consisted of a tent (heated), and a table full of goodies. I had a 2.5 gallon ziploc bag full of my “stuff” and another 2 full of clothes. I was still jogging to the start line, when at 8:00am sharp the race started. It was cold (SURPRISE!), even frost on the ground (WTF?).

First loop – 12 minutes. YAY, time in the bank. Second lap 11 minutes. YAY more minutes in the bank. I stuck at around a 12 minute pace for a few loops, until Shannon came around to lap me. Shannon’s spirit always motivates me, she needed to slow done some, and she told me I needed to speed up some – so that meant our pace was perfectly matched for quite some time. Our target loop time was 10:45, and it was going really well. 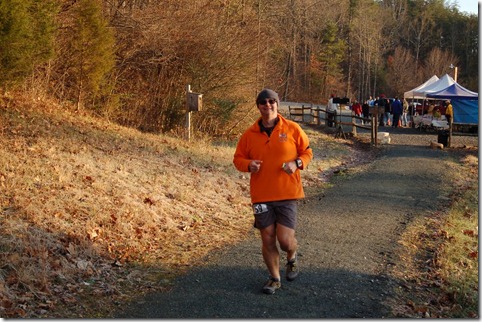 Early on – maybe first loop or 2. See that white frosty looking shit on the ground? Yeah – I know, it was December, I was surprised by that. (Picture Ricky) 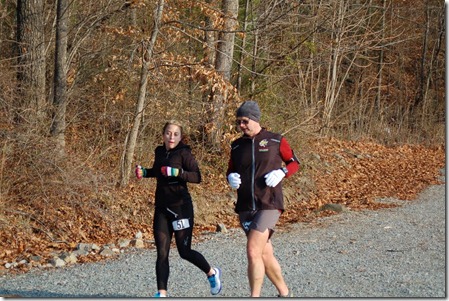 Jimbo and Shannon sorting out the world’s running problems, and strategizing over Facebook fights. (If you look closely, you can see the shroud of awesomeness that engulfs Shannon). Picture Ricky.

10 or 11 miles in I had my first shoe change, I switched from my Merrell Trail Gloves to my Kinvaras, and kept plodding away. Some loops I was on my own, others I had company. This is what I love about short loop races – you get to see all of the other runners – if you want to chat, you can; if you want to lose yourself in your thoughts r music you can. Time went on, round and round. Plus the occasional break. Hmmm, probably too many occasional breaks. I also got to see Amy running for the first time in many months!

Talking of Amys – my other Amy friend was also running (Amy Surrette – guest writer to this blog after Hinson). Amy was running for a cause – for a family who had just had triplets and the mother was having medical issues. (Details here) She was running solidly – her whole family was there, and they were cheerleaders to everyone who was running! A special thank you to Kayla who presented me with a strip of Bacon early in the day. It is almost like I have got this reputation of being a bacon loving fiend or something. I am certain it was nothing to do with the fact that I demolished a truck load of bacon in the Shoneys after Hinson – and Kayla may have been a witness…..)

The course is made up of crushed granite surface, not quite flat, and even had a short steep climb (That One Steep Hill™ – every course has one) and an equally short steep descent. It doesn’t take long to figure out where to walk and where to run, and I like that routine of a short loop

About 7pm Shannon announced that she was done – happy with 50, unhappy with foot pain. I was in the low 40’s at this point, and was tempted to be done too. It was getting cold. (SURPRISE……. it’s not like it is December or anything). My left foot was hurting (very weird pain – it felt like my laces were done up too tight (they weren’t).

The amount of people still going was rapidly diminishing – and so was I. With about 50 miles done I was tired, cold, wet and in pain. And Amy’s car was warm. Time for a nap and to warm up, and probably time to call it a day. Dave and Tom were still going well. Not sure how long I slept for, but when I came around, I was so toasty. And hungry. I think I headed out to do a couple more loops – I was probably running for about an hour – at a guess, maybe 2am? I dunno, my memories are fairly fuzzy. It was cold, the moon was bright, and it was cold.  Some time later, Tom joined us in the car, he was also pretty much done. Dave was still going.  Around 4:30, Tom and I figured we would walk/jog  loop, and then defrost, walk/jog then defrost – rinse and repeat.  Tom started to get a second wind, he would walk with me for a loop, and while I thawed out, he would run a loop fairly hard, giving him time to defrost for a few minutes. This was a 30 minute cycle. It actually worked quite well – and I do wonder how I could have done had I discovered this ‘technique’ sooner. At 5am, the temperature was recorded at 21oF . Yep, it was cold (SURPRISE!!). About 6:00-6:30, with over 90 miles done, Super Dave had had enough. He ran  incredibly well through a tough night. Awesomeness.

7am – daylight returned, and it has been said by ultrarunner after ultrarunner, that daylight just makes the whole world seem that much better. The fatigue and pain that had plagued me through the long long night had miraculously disappeared. There was an hour left, and I had just less than 57 miles on the board. Hmmm, can I do 12 minute miles? Target 100 had returned. 100k. GO JIMBO GO. Just like at Hinson Lake, I reserved my best and fastest miles for the last hour. I actually considered myself a fraud – considering how bad I felt in the night, how come I could run so strong now? 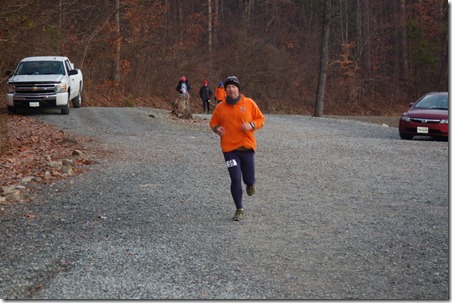 23.5 hours or so. (Behind me, you can see much of Team Awesome, Super Dave, Shannon (matching orange fleece from last /this year’s Freedom Park), and crew-person extraordinaire, Tamra)

Pushing hard, and watching the clock, it was going to be tight, but it looked like I would hit 100k. Just before 8am – I was handed a popsicle stick with my number on it to drop when the horn sounded at exactly 24 hours. Amy Surrette caught up with me, and we even ran up ‘the one hill ™’  and we ran together for the last few minutes.

So, to summarize. This is a great race, I was well fed, well supported by wonderful volunteers and in the company of friends for most of the 24 hours. It was cold – and I certainly wouldn’t complain if it occurred sooner in the year, but whenever it is, I will almost certainly be back.

Thanks Ricky for the photos - you can find more here.
Posted by Jimbo