Work took me to California this week. Another week of motel treadmills, bad food, blah blah blah – yep, life on the road with Jimbo. Or so I thought…….

…… as it happened, I found myself with a couple of hours to kill on a beautiful sunny afternoon. “OK then,” I thought to myself, “everywhere I look around this town I see mountains not too far away. I wanna go run in some mountains”. Google maps is a great tool – not 20 minutes away was the Henry W Coe State Wilderness Area. More research and I found that there were plenty of trails.

In the parking lot, there were trail maps to take. And off I went on what was called “The Steer Ridge Loop”. What followed was one the best runs I have ever done. Not the furthest or fastest – but probably one of the fun-est (yeah, I know – it is a made up word). Wonderful views, warm sunny weather, calf burning and lung searing climbs, with exhilarating, quad frying and toe crunching descents. Oh, and I actually “bagged a peak” too. It was one of those runs where I so wish I could have got there earlier so I could have spent several hours in the hills on the well marked/posted trails. Alas, 7.5 miles and a couple of thousand feet of elevation gain had to suffice. It was one of those runs that despite the effort of some of the climbs, I was smiling the whole time. I was singing some too.

Have  you seen that Geico commercial? The one with the pig on a sled or something, flying down a hill, going “weeeeeeee, weeeeee”. Yeah – it was like that. Here is the Geico commmercial.

Just The One Hill™ 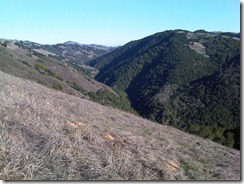 It occurred to me when I looked at the map afterwards, that as far as my eye could see, every single view I had were all within the boundaries of the wilderness area. Awesome. 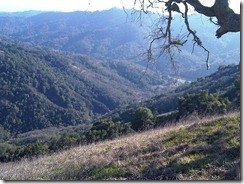 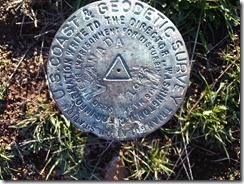 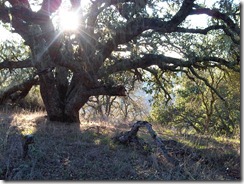 After the wonderful run the day before – it was a shame, but work got in the way, and as such I wasn’t able to head out into the mountains again. (WTF? LOL). <sigh>

But I really couldn’t face the drudgery of the hotel treadmill again. The front desk folks told me that there was a cycle path just a few minutes walk away. That’ll do. You know about the 2012 5k challenge right? Well I needed this week’s 5k. The weather was warm again, and I decided to go for it – and see if I could do a sub 24 minute 5k outside – after two failures so far this year (they were only “sort of” failures, but still fell within my very own self imposed rules for the challenge, – they were above 24 minutes, but below 25 – I allowed a 60 second grace in January).

The trail was flat, easy surface and probably as ideal as you can get for a fast run.

After a brief warm up, and with the hope of loosening up the sore quads fro the day before…… off I went

Out 1.55 miles  out– trying to remain at a happy pace, but just edging my way into the pain cave. Sub 24 minutes looked doable.

Back 1.55 miles – any fool can run a fast 1.55 miles. GO! Into the pain cave I went. A mile to go, and the possibility of sub 23:34 looked doable (my 5k PR)The last half mile was just about hanging on, and maintaining the pace as best I could. The last quarter mile, every cell in my body was screaming at me to give this shit up. But sub 23 looked possible. The last tenth – barring my legs totally giving up on me (which wasn’t out of the question), I was going to finish in less than 23 minutes, and crush my PR

As exhilarating as the run in the mountains was, this run also gave a buzz – similar but different (for one, I wasn’t giggling or singing), and the mountains didn’t make me feel like puking. There is something special about a fast 5k – you can leave absolutely everything out there on the trail – and if you totally bollox it up, well, you just walk for a bit. That feeling of pushing through the pain barrier when everything is telling you to stop is a pretty neat feeling (but only when you HAVE finally stopped though!)

But anyway – it is almost like this mission of trying to run a fast 5k every week is paying some dividends, even after just a month of it. Still, WTF do I know eh? LOL.