There really is Just The One Hill at Pilot Mountain

I joked at Pilot Mountain last year that if you had done the half marathon, then you missed out on all the fun – the significant climb to the summit. Everything else just pales into insignificance on this course. “There is only one hill” I claimed. This has stuck with me for the last year. Just The One Hill™

But you know what? I am right. Sure, the race starts with a steep climb – but a quick glance at the elevation profile will show that  everything (even that steep climb at the start) up until the climb up to the summit is a molehill by comparison.

Anyway onto the race. The goal – smart pacing and to beat last year’s time (5:42), and to finish as if I could run more. I had predicted 5:30. And of course to get some nice hill work and have a blast in the progress.

Having done this race twice before, my approach was to take my time and pace easily until the 8 mile point – work hard up the hill, ease off around the summit and the initial descent (a lot of loose rocks and steps etc., the kind of things that can ruin your day as well as your ankle), open it up a bit for the bulk of the descent, then push it a little for the last 10k. As a result of the strategy, I have little doubt that I was close to DFL until the climb. Starting the ascent – I confirmed what I already knew. I really enjoy hill climbing! Yay! Slow steady calf burning climbing. I was giggling to myself. I passed a few people on the way up, and was really enjoying myself.

Once at the top, I caught up to my friend Amy. We chatted about The One Hill™ – Amy was also having a whole bunch of fun – apparently even continually saying “WTF? LOL” to herself on the way up. 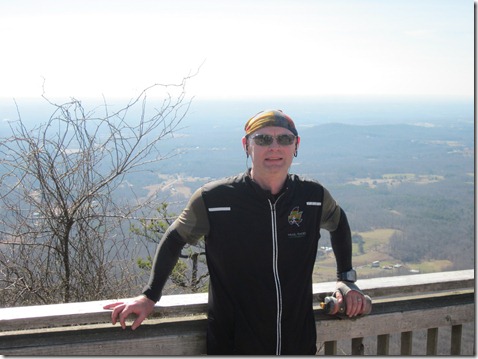 The reward for the effort – the views from the top are so very worth it. Except I got in the way of any view for this picture.

The run around the summit and especially the initial drop down from the summit can be quite treacherous at times. It would be hard to run this part with any sort of speed – well especially if you are even slightly worried about the possibility of breaking any ankles.

Amy and I stuck together for most of descent. She will be running 100 miles at Umstead, and is just coming back from an injury, so it was good to see her running pain free and happy in her first long run back. About 6 or 7 miles to go, Amy ended up taking a detour into the woods, and I spent the rest of the race on my own.

The last 10k was when I saw the benefits of smart pacing early. I was in a happy spot, and running at a very nice pace over the rolling molehills. In fact I think my pace picked up nicely. I know I passed maybe half a dozen people in the last few miles.

Finished in 5:24. I even had an opportunity to act like a race-jerk. Picture the scene – 1/2 mile to go, I passed a couple of people. The last 100 yards or so, I realize that one these guys is trying to run me down. GAME ON! LET’S RACE. The sprint to the finish line was awesome! Especially when I knew I had him beat. But perhaps turning around and crossing the line backwards was not the least cocky thing I have ever done – but that is what I did nonetheless. It was all in good fun though and the fella I had just raced, laughed and we high fived when he finished a whole two seconds later. And I caught it on camera. Enjoy

I am only left with two questions.

Can’t wait to find out.