After the Medoc Trail Marathon last year, I had a conversation with my friend Alanna who had travelled south for a number of races, that I should perhaps visit the Garden State to do one of their races.

3-Days-At-The-Fair seemed like a good one to pick. It’s in May, so it shouldn’t be cold (FLOFL). I have heard good things about it, and besides, I like short loop timed races.

Yep, you read that right, it was going to be my first 48 hour race, and I really had no idea what to expect.

In the days leading up to the race, I was working on the West Coast. My flight back would not get me back to Raleigh until 11pm, home by midight – making it difficult to be in NJ for the race start at 8am. Whatever. It is a timed race, and a late start would not matter.

8 hours after landing the night before, 4 of which were spent sleeping, I was back at RDU to fly to Philly to meet Meredith who was going to give me a ride to the race.

It felt very strange to be starting on my own – there were people who had ben running for 34 hours in the 72 hour race saying “Good job” as I jogged past them, I felt like an imposter for a while.

The late afternoon weather was actually pretty warm. I ran several laps with Alanna, also said “hi” to other friends out there – Steve, Paul and Super Dave running the 72 hour, Tammy running the 48, Jessi in the aid station.

The miles clipped away, slowly of course, but they were starting to add up. One thing that felt strange, only mentally strange, but it bothered me a little – the loop length about every 7 laps would screw with my head. You see, every 6 or 7 laps or so, you would start a lap at (say) 12.04 miles, twelve-point-something – come around to the start again at 12.9 – still twelve-point-something. Felt like you hadn’t moved at all. It screwed with my head. (I have since learned that they are going to make the course exactly one mile for next year. I like that.

The aid station truly was terrific. Because the race was in the state fairgrounds, the start/finish area went right past a fully stocked kitchen. You want something to eat, order it, go run a loop and when you get around again, it is cooked and ready to go. I liked that. That said, for the first several hours, I mainly stuck with fresh fruit.

Alanna went off for some sleep at about 11-ish – I wanted to carry on until I had at least 30 miles on the board. Headphones in and plod away.

A few things happened during this portion of the night, 1) it got cold. My hilarious joke (which I told several times) was "Do you know what we call this kind of weather in North Carolina?………………. Fucking January, that’s what”. (WTF? LOL) But really, it did hit the 30’s, and I ended up breaking one of my race rules, and wearing the race schwag, a rain jacket, to keep warm – nice!. The other thing that happened as I chalked up the miles was 2) I got tired. I mean really really exhausted. Yawning all the time type of tired. And 3) I established “The Pattern” – my way of picking my running and walking spots for the whole loop. It went like this. From the start – walk up the slight incline, right turn, and go past tent city, left turn and left again taking the short cut by the fire hydrant. Slight down hill now – start jogging, right turn through the gate, walk up the hill to the yellow barrier, left turn, jog down the hill to the second trash barrel on the left, walk to the next trash barrel, left turn, jog to the first lamp post – then run/walk every other lamp post. Left turn onto the gravel part – walk until the right turn on the “home stretch”, jog to the final left turn, and then walk to start finish.

Did I mention that I was cold. And tired?

Sometime around 1 or 2am , I got the 30 mile mark and that was the point I decided to sleep. Or at least try. I was wrapped in my snuggy type thing (it isn’t a real snuggy – more like a sleeping bag with no bottom so you can walk around.) in a failed attempt to remain warm.

I lay down for over 3 hours and could not sleep for a second. And yet I was so exhausted. My mind wouldn’t switch off. The cold was a problem too. Do you know what we call that type of cold in North Carolina?

Around 5:00 to 5:30,  I decided to get up and start moving again. Exhausted still, cold but with a little renewed energy in my legs, I started moving again.

The sunrise and a breakfast of coffee, an English muffin and bacon brought with it some warmth

As the day wore on, exhaustion was still the big problem though. So utterly utterly tired. Even the tried and tested NoDoz capsules washed down with a coke seemed to have a limited effect.

From time to time, I would rest and try to sleep. Even a few minutes would have helped. But no dice.

New friends joined in the race, Mandy and Meredith were running the 24 hour event.

I would still try and cat a from time to time. No luck, I even had one of Todd’s beers to help switch my mind off. Nothing. <Ugh>

I remember walking a loop with Tammy, the conversation about one of the energy drinks they had at the aid station had me in hysterics – the drink was called “Cocaine”, much giggling ensued when we asked for a straw made out of a dollar bill, a razor blade and a mirror to go with our “Cocaine”. Well, I guess you just had to be there.

Sometime in the early hours of the morning of my second night, I crossed 90 miles, and decided to call it a “day”. Tired, so tired. And yet I still couldn’t sleep. Not for a second. <Sigh>.

5am, I was moving again, knowing that barring a disaster, I would get 100 miles. By that time though, that was my one and only goal, I truly didn’t care about the other goals.

Super Dave in the 72 hour race was desperate to get to 200 miles – he was at 180 or so. I don’t think I have ever seen so much determination, he would lap me frequently on his way – he reached his goal. Quite something to watch.

From time to time, even this late I the race, I still tried to get a quick 10 minute nap – but nope, nothing. 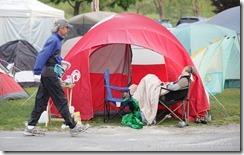 Sometime around 8:00 with an hour to go, I finished my 116th lap. One more to go for 100 miles. Alanna was on the same loop as me, but just a few minutes behind, so I waited, and we completed our last lap together. Steve kept us company as we ran “The Pattern” just one more time.

I was so happy to be stopped. And tired. 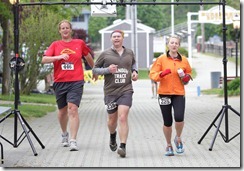 Jimbo and Alanna finishing up 100 miles with Steve for company

A shower and a pig out breakfast was a wonderful way to cap off a satisfying run. 100.36 miles is a long way – even though it is my 5th time I have run 100 miles, it is still a long way! Being awake for over 48 hours is a long time.

So, conclusion? I really liked this race. The RD, Rick and his family really go out of their way to support and encourage the runners. The volunteers were as entertaining as they were awesome, and there was certainly nothing that I felt that I needed which wasn’t available. Apart from warm nights and sleep.