This year, I also gave athletes from anywhere in the country (world even) to participate – just let me know the mileage ran, and I would list you in the results (those with the asterisk). We had runners in NJ, NV, Western NC and OH.

The rest of the runners deserve a ton of accolades for even just showing up – they were greeted with heavy, cold rain – a drenching, soaking rain.  Everyone who managed to run even just a little while deserve a ton of credit – congratulations to all.

BCRT Chief [Brick City Running Tribe here in Sanford), Tim Preble ran a smart race all day, staying in sight of the leaders, and eventually picking them off to win overall. Considering a year ago to the day was Tim’s first ultra – where he just got above 26.2, and he suffered a rather spectacular meltdown towards the end, he has come a long way in a year! Congrats!

There was a tie for first place among the women the second year running, with Amy Surrette, and Sue Harbour grinding out 21 miles each. Gene Meade wore a skirt of some description. I think he was trying to con the RD into making it a three-way tie for the women. 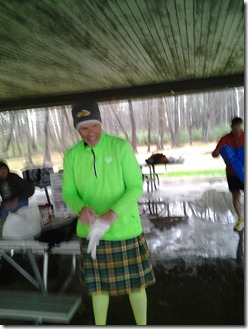 Gene and his skirt. “Ach laddie, it is but a mist!”

There were distance PR’s for Shawn Sheffield (who also got his first Ultra distance) and also Colin Barrows. 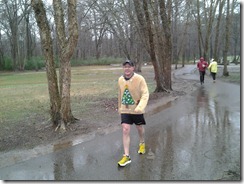 John Price came all the way down from Virginia Beach for this run – how cool is that?? John has an impressive ultrarunning resume, having run across the United States in 2011 (averaging 35 miles per day for more than 3000 miles), almost the complete length of Great Britain earlier this year, and he is a veteran of The Last Annual Vol State 500k run across TN and The Barkley Marathons. In 2013, his next adventure will be 30 Iron Distance Triathlons in a row. Yes, you read that right, that is an Ironman every day for 30 days, for a total accumulative mileage 4,218 miles in a month. And now he can add to his list the fact that he survived the Boxing Day Madness Typhoon of 2012! 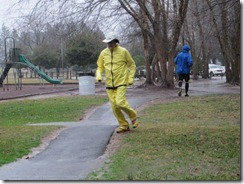 I have a ton of chipotle chicken left , as there would have been no way I would have got a grill lit (going to have a cookout on New Years Day probably to get rid of it). There were a ton of great snacks, and Gene’s vegan soup was really nice too – got even nicer when we added Deanna’s deep fried Cajun turkey to it!

Also, as a result of me being lazy, I did not get around to arranging t-shirts before the run – so instead, I had people sketch stuff and I am going to make a whacky, unique, “reflections” of the day shirt…. watch this space – it could end up looking something like this: 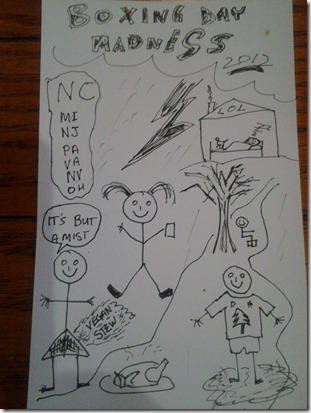 On the whole, I think those brave enough to get out of bed and come for a run in the rain had fun – congrats to everyone who took part!