More thoughts on Boogie/Laramie a week away

It has been 6 days since the boogie marathon. As I look back, I'm thinking how much I enjoyed that race. It was tough, brutally tough - but I felt much better after that than any other marathon I have done. I learned about the my gear, I learned that insect repellent should have been sprayed on at the beginning rather than after the pigeon sized deer flies had attacked. Honestly, I had the biggest insect bite I have ever had - the red swelling was at least two inches in diameter - and this was a bite through my shorts. Above all, I learnt that it IS possible to feel good after a marathon. I definitely felt as though I could do more, which means I think I paced myself smartly, and fuelled myself well.

Talking of shorts............. The "Race Ready LD Fitness shorts" are absolutely fantastic. No chafing at all. Zero. Zilch. Nada. I am very very happy with them.

My Nathan Sports Vest is good too. I can carry a lot in it, plus it had the added bonus of being able to stuff ice in the back pocket, which really helped to cool me down as the evening wore on.

It was also very good practice running at night.

Now then, I found the two photos of me on the web - they show a couple of things (other than me) - 1) That was a steep hill! and 2) Notice the two guys behind me, the shorter guy is actually blind, the taller one is leading him with a piece of string between them. They are local military (based at Bragg I guess), Fred Dummar is the taller one, and Capt. Ivan Castro is being led. Ivan had on the back of his shirt, "Blind Runner - I will never quit". Fred had "I will never leave a fallen comrade". They both finished the 50 miler in 11:41

The spirit of the marathon was alive and well. My hat goes off to both of these guys, it was an honor to be on the same course as them. 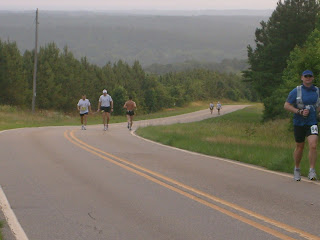 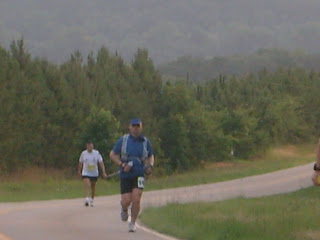 One week from now, I will be probably eating my last meal before my first 24 hour race. The nerves are kicking in a bit. Never having run 12 hours before (11:48 being the longest at Umstead), let alone 24 hours. Last time I was awake for 24 hours straight, I am certain alcohol would have been involved. 8000' altitude. Yep, 8000'. Not sure I have ever been that high before unless surrounded by a metal fuselage with wings. Apparently they don't have deer flies there though.

This week, I felt recovered enough to run on Wednesday, and so far, I have done a couple of gym sessions and twice around the shorter 2.7 mile ankle breaker trail.

I have not posted a tune for a while. How about this, a great running song, by the singer/writer who also wrote the one of the best ever ballads. Hazel O'Connor.

This song, Eighth Day was on the movie Breaking Glass, which was a bit of a cult classic in the late 70's.