and just like that, it was over
A quick think back a week ago – it was Thursday, and I was getting ready to head to Phoenix for the Javelina Jundred 100 mile race. It was the last day of my streak – you see, I had convinced myself that if I ran every day, it would force me to train well, to go out and run even if I didn’t want to – I had ran every day for over 10 weeks – not one day was missed – my mileage was over 500 in that time span. I had raced 3 marathons, a 5k and a 50k in the preceding 5 weeks – not mention Hinson Lake and the Really Really Really long shirt run in September. I had a marathon PR and a 50k PR. Add to that course knowledge from 4 laps last year. In short, I think I prepared well.

I even had a vague plan – take it easy the first half of each loop, lots of walking as it was mainly uphill, then open it up some on the second half of each loop. I figured about 3:15-3:30 for the first couple of loops – slowing down to 4:30+ for the night loops – even 5 hours, pick it up in daylight a small amount, and that would give me something like a 28 hour finish.

As soon as I arrived in Phoenix – I met my friend Dave in the running store he works at – “IRun Phoenix”. A great store, they had everything I needed for last minute supplies – it is owned by a trail/ultra runner, so the selection was great (http://www.irunshop.com/). Then off to Javelina Jeadquarters to get the schwag. Gotta love a race that gets you a 12-pack cooler. AND a t-shirt. I caught up with some friends then headed to Dave’s to get some sleep.

My plan of trying to stay on East Coast time for the week I was working on the west coast meant that the 4:00 am alarm did not feel so bad, I was ready to go in 15 minutes, armed with some fresh Cost Rican coffee and a bagel (another friend of Dave’s was crashing there – Felipe from Costa Rica). Just after 5 Felipe ad I got to the McDowell Mountain Park – the organization and shuttle service to the Jeadquarters was flawless. I met up with John from NC and his buddy Matt who graciously offered to crew for me.

6:00 am, it was go time. No pressure, take my time and just plod the first half of the course. I took video and pictures of the marvelous sunrise and moonset. Halfway round the course starts more of a gentle descent – learning my lesson from last year, I did not pound down these hills – just nice gentle running. Loop one, was finished I about 3 hours and twenty something. Perfect 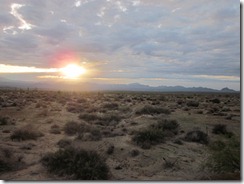 After a fairly quick turnaround at the start finish area, it was back out the way I had come, and up the hill I had just ran down. Nice and easy to the half way point then pick up the pace. The plan was working – I felt great. Second loop was uneventful. I fuelled well, hydrated well – and back to the start finish in 6 hours and fifty something. Perfect. Again. 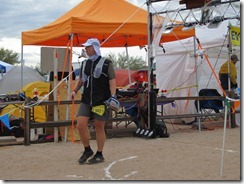 At his point last year, I had lost 8 pounds in weight and was badly dehydrated – the cooler weather and smarter running meant that was not the case this year.

I changed socks, and was back out for lap 3. Again, another uneventful lap. Unfortunately though, I met up with John who was sitting at the aid-station 7 miles from the start/finish area – he told me he was done, with problems in his shins. I could see they were swollen. I chatted with him for a few minutes before heading back. 45 miles done in 10 hours and fifty something.

Knowing it would be getting dark this loop, I took a longer break to get ready – switching to a long sleeve shirt, preparing headlamp, switching shoes (at this point, the rocks on the course were beating my feet up – so I switched from the 101’s to the more cushioned Cascadias – all a part of the plan.)

And back out after 20 minutes or so. I was a little slower now on the power walk up the hills, my 50 mile split was 12:20 – which was really where I thought I should be – I figured that put me on course for a 28 hour finish. I felt good but I rested a while at the Jackass Junction aidstation, I took in a couple of cups of Ramen Noodles to get some calories in, and headed out. After a mile or two, the course flattened out, and the strategy of preserving energy for the second half of the course was paying off – I was walking strongly on the flats, and jogging slowly on the downs – even picking people off who had seemed to go into an early death march. The night was cool, the noodles had kicked in and I felt great. There is a aid station about two miles out from the start/finish, I needed nothing there so just sailed on through to get to the finish – it was looking like my 100k split would be about 15:45 – almost 3 hours faster than last year. I was very happy.

Just half a mile or so later I managed to kick a rock, and in the process of successfully preventing myself from falling, I managed to land awkwardly on my right leg, and I twisted something on the inside of my knee. It kind of felt like a rolled ankle, but in my knee. My normal routine when I twist my ankle is to swear loudly, but keep moving ad the pain will eventually subside. It didn’t. IT was especially painful going down hills.

Back to the Jeadquarters – my friend Adam (www.sedonarunning.com) sat me down and got some ice. John and Matt were also there to offer sympathies (and a beer). Even though the pain subsided with the icing, it was still painful to run. After 30 minutes of icing, sitting and thinking about the prospect of going out for another 15 mile loop, I pulled the plug and took the beer that was offered. In my head, that was the decision made. DNF with a sub 16 hour 100k (A PR)

So, a few days later – here are my thoughts. Within a couple of days, my knee felt fine. That alone caused more angst, because it of course crossed my mind that I probably should have sucked it up and continued. The sensible side of my head though said that perhaps dropping was the right thing, because I did no additional damage and was able to recover. Who knows?

but it was over.
Posted by Jimbo