I have long held this idea that I would be able to put a race on. Not sure what gave me that idea – other than the fact that I do a lot of races, and I think I know what makes a good race.

Cost – yep the cost of entry is important, but again, I have no problem with runs making a profit, but if you put profits above the quality of your event from a runner’s point of view, then guess what? They won’t return.

Start putting the sponsors first, or the city, or the charity or whatever first, then from a runner’s perspective, it won’t be a 100% successful event.

So, knowing that I know what makes a good event – here was the idea; a timed race on a short loop. Why? Because that is the sort of race I like. What about charging an entrance fee? I decided not to, and follow Terri Hayes’ model (www.ultrasontrails.com), and ask for donations to cover my costs, but making it very clear that it was voluntary. Same for aid. One of the benefits of doing a freebie run is that I can basically invite who I want. Anything left over would go to CARA – Carolina Animal Rescue and Adoption (www.cara-nc.org)

Kiwanis Park in Sanford would work, a nice loop, Just One Hill™, running surface similar to Umstead, about a mile long, close to a picnic shelter with a grill. I picked December 26 as the date. Why? It is different, it was a day off for most people, and I think people may like the day after Christmas to get out of the house and get some fresh air. Selecting name was fairly easy too. December 26 back where I am from is “Boxing Day”. Jimbo’s Boxing Day Madness Fat Ass Fun Run had a nice ring to it. Just because I could, I added a few more words – “Dumb Ass” and “Mad Ass” sounded right.

Putting the word out was fairly easy –Facebook is a great tool for that. Plus, now that I am running with the “Brick City Running Tribe”, I was hoping to be able to recruit some locals to come out for a run. Then of course there are several runners in the Raleigh area, and the Mangum crowd not too far south of Sanford. Pretty soon I had over 20 people saying “yes” and another 20 or so as “maybe”. Game on.

T-shirts – did I want to do t-shirts? This was the gamble. How many to order, what sizes etc. Initially, only about 6 or 7 people expressed an interest. Eeek. I ordered 20 – hoping that I wouldn’t end up out of pocket.

A couple of days before the race, I was contacted by the publisher of the Sanford Herald. He wanted to do a write up on the run. His son contacted me for an interview over the phone – and Christmas eve, the article was printed. Not a short paragraph in the middle of the paper somewhere – but in the Sport section – front page, above the fold. WTF? LOL. 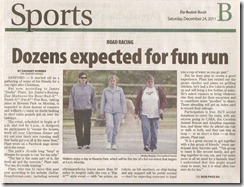 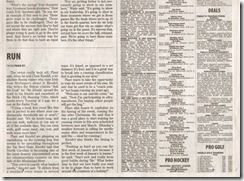 I was actually pretty nervous in the couple of days before. What would I do if nobody showed? Or the opposite, what would happen if hundreds did as a result of the newspaper article? As for aid – I decided to supply chipotle chicken thighs and bacon. 6lbs of bacon and 13lbs of chicken. No idea if it would be too much or not enough. There were promises of baked goods, and a load of Gatorade goodies too from Chris who is sponsored by them.

Race day – I arrived at a little after 8am, and 71 year old Dan Pieroni was already running laps, he had asked me if he could start early. Of course he could – I mean, why would it matter to me if he started early? Trever Schick was already there in his car waiting. So at least two  people showed. As I unloaded the charcoal, I realized, I had no means to light it! I sent a panicked text to Amy.  I also later asked Trever if he had anything. Thankfully they both came through for  me.

8:30, more people started rolling up. Yay… DOUBLE FIGURES! I explained the procedure for scoring – write your name on an index card and mark it each time you came around. I had no volunteers as lap counters (I hadn’t asked for any either).

More runners showing up, plus tons of baked goodies.

One other thing that scared the crap out of me – I only had my wrist watch as a stop watch. What would happen if it died, or I accidentally stopped it while timing the 6 hour run? Later I remembered my new Christmas toy – a Samsung Galaxy 5 had a count down timer (which instantly propelled my new toy into supreme awesomeness).

A 10 second explanation of the course, followed by the word “go”, and they were off.  When people were coming around after the first lap, I asked some of them what they thought of the course, and only received positive replies. This was when I relaxed. This was going to work.

From this point, almost everything went smoothly – the only thing that happened was when the wind picked up slightly and the index cards went flying – thankfully someone had brought a case of oranges and I weighed them down with those. I did a loop to get as many pictures as possible of the runners, and even ran a few miles myself.

As six hours approached – the runners set off on a 0.15mile baby-loop so I didn’t have to count partials.

Ben DIllon brought some goodies he had left over from a couple of races, so I gave out a couple of prizes.

And that was my day. I actually pulled this thing off. People surpassed their own expectations, first ultra, first marathon, first 50k, first time in double figures. Around 50 people ran some laps – and people had fun, they enjoyed themselves. New runners were inspired by the “seasoned” ultra folks, and in turn, those seasoned runners were inspired by the new runners beginning embracing the sport. I had many comments about how people were so friendly. Mission accomplished. I was impressed by how many people came from Sanford – I think we counted 20 or so who ran some loops (not everyone used a score card.) I even had at least one bandit running. Yay – when you get bandits, then you know you have hit the big time.

What would I do differently? Not a lot. Ben suggested I get a waiver signed and I should have started the food earlier. I agree on both counts. I also may make people sign up online for a t-shirt, I will have to look into that. I think I will have more interest next time too. I will keep it as a Fat Ass though, I do like the fact that it is a gathering of my friends and people that I know.

Other things to think about,  Boxing Day 2012 is not a holiday in the US. So my initial thoughts are to make it a New Year’s Day Resolution Run type thing, or maybe pick the Saturday between  Christmas and New Year’s…… which means I may have to pick another name……….. Hmmmmmm.

I have ideas for other races too – 12 hour night time run in the summer, and maybe something for Feb 29th. Then there is St George’s day too……..

Oh, and as a footnote – the costs were covered, and a $100 donation was made to CARA. Thank you to everyone ho came out, and thanks for donating.