This is a tough race – and another Mangum Track Club event with that feeling of a family reunion. It is extremely well directed by Marie Lewis and her husband Jamie. You really don’t want for anything.

14 loops, each about 4.5 miles, the course is something like this. The first mile, is mainly single track, with a sandy surface with plenty of roots to trip over. Seems as though it is mostly down hill. The roots make it hard to get any rhythm going. Mile two starts with some very narrow single track, more roots. As the mile continues, there are some boardwalks, and a few fairly decent climbs. And more roots.

The third mile is the easiest of the course. Mostly runnable early, wider trail, and not nearly as many roots. 1/4 mile up hill, then a nice descent into the second aid station – very ably run by Doug Dawkins (RD of the Boogie Races), and Jimmy Ballard. The Mocha they offer up is just wonderful, caffeine, sugar and chocolate is a tough combination to beat. After the aid station, mostly down hill, less technical trail (carefully attempting to avoid the “son of a ditch” – thanks Gene and Lauren for the name – definitely appropriate.

At mile 3.5, cross a bridge, make a right turn, and back on single track – not too rooty for half mile or so – ups and downs. With 1/2 mile left on the loop, the trail widens for 1/4 mile or so, with nicely rolling hills. The last 1/4 mile is tough – the loop ends with the toughest climb and the most roots – then over the timing mat and to the main aid station. 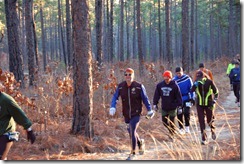 As for my race – I didn’t really set out with too many goals in mind. Weymouth Woods is now a Western States qualifier, so many people went out with that in mind, and aimed for sub 14 hours. My two previous finish times were 17:57 (in the pouring rain), 17:24 (in the snow and ice covered trails), so I could see no way that I was going to trim about 3.5 hours off of my 2011 time. 14 hours was never a target. Beating my overall 100k PR was my “WTF? LOL” goal – 16 hours, my more realistic goal was to beat my previous best Weymouth Woods time. Finishing alive and with a smile was of course my primary target.

My friend, mentor, unpaid coach and occasional psycho analyst, Shannon wanted me to try an experiment. “Go out hard” she said, “50 minute loops and see what happens”. So I did.

I started the race pushing the pace, skipping over the roots with the finesse and grace of a three-legged elephant, but noting how my Jordan Lake trail running prepared me for just such an escapade. Course knowledge really helped – having done something like 30 laps of the park before (that said, I did manage to go off course on Lap 12 of last year’s race – DOH!) 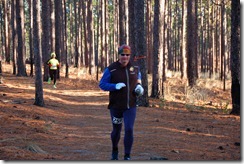 Jimmy and Doug were cooking grits at the second aid station. I love Southern food, but grits is something I pass at. “Kinda like eating boiled sand” I tell people. Who then normally remind me that there is a ton of butter in there – but to me, it makes the grits taste like boiled sand with butter. I passed. (But appreciated the offer)

First three laps went well – 50 minute loop average. Half way around lap 4 – oh oh. Stomach cramps. And not the sort of stomach cramps that say “best go to the bathroom at the end of this loop” – no these stomach cramps were screaming “get your sorry butt into the woods NOW!” So I did. And lap 5 too.

Yes, we had “issues”

So with the fragile stomach, not many calories were being consumed and the pace inevitably eased off. No big deal – I was never going to be able to hang onto that pace anyway.

The half-way split was about 7:10, and I took a break, sat down for a few minutes and rested some. 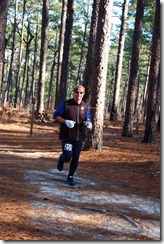 As the sun went down, I really was starting to feel tired. BUT, I was going to get to play with my new toy. A Super Dooper Fenix handheld flash light. It was bright. Really bright. And it made a phenomenal difference to running technical trails at night. Until the batteries died. And I didn’t have any spare. Idiot.

My friend Gene, definitely smarter than me had a spare pair of batteries. For the last half of the previous loop, running with just a headlight made me realize just how much of a difference a good light can make, especially on technical trails. My Fenix is a keeper. I will invest in batteries for my next run in the dark though.

It got cold after the sun set (No shit Sherlock – anybody would think it was January or something), but changing into dry clothing made me feel better. Still tired though.

Now that the stomach issues had rescinded into just being a memory. I felt that some soup would be the order of the day. Potato soup. Awesome potato soup. Super soup. Carbs, salt and warm. Just the perfect combination, and cup or two of that after laps 10 and 11 really gave me some energy back.

Around lap 10, I started figuring out when I would finish – looked to me like about 17 hours. I was going to be happy with that. I soon also started thinking that it would be nice to beat last year’s time by 30 minutes – so that became the goal. It required a little bit of pushing to make it, but eventually, I crossed the line in 16:49 – 35 minutes faster than last year. Yep, that’ll work.

Looking back, I have to say I really enjoyed this race for a number of reasons. The first of which is the race organization and the volunteers. Everyone goes so far out of their way to help, aid and support us crazy folk out there running.  As well as the people taking care of us, there are great aid stations, with a great selection of food. It is definitely a runners race – put on for runners, by runners, with wonderful volunteers, good schwag and all for a very reasonable price. Great job by everyone involved. And thank you to everyone involved.

The other reason this race is a good one – the distance. 100km is a good distance for me. It takes you into the same “pain cave” (thank you Linda for that expression) as a 100 mile run, you begin to get the same levels of fatigue, you get to question why you do this shit, your body hurts, you have to manage nutrition and hydration – you get all of that, but without the total annihilation of a 100 miler.

I will be back next year, and I am looking forward to the January heatwave that I just know that Marie will order up in advance 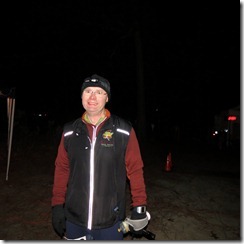