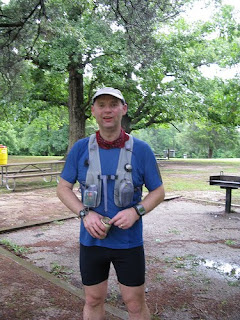 A beer and a mouthfull of Grilled Cheese and bacon sandwich was just what the Doctor ordered at the finish.
This was my first Fat Ass run (not my first 'fat ass', I have had one of them for a couple of decades at least). The whole day was a great experience.
The course - 4 laps of 8.7 miles. Each lap had 2 sections, a 3 mile loop, and 5+ mile loop. After each mini loop, we were back to the main picnic area aid station.
My goals were:
I feel as though "mission accomplished" is an appropriate statement.

The main talking point will be the weather. Humid, hot, thunderstorms. I shouldn't be suprised, I have lived in NC long enough to know that in August, the weather forecast is practically the same everyday, "Hot, humid, possibility of thunderstorms". We got it all.

Lap two - Still humid, but the sun was getting stronger and the heat picked up. Ice filled bandanas, ice under my cap, and switching shirts from one that had been sitting in ice. All of this worked to help keep me cool. I went through over 80 oz of drink during this lap and was sweating buckets. This was also the lap of the killer deer fly. Holy crap - they were as big as pigeons, no really, they were. I was bitten by them probably half a dozen times. One of the bites went bad the next day - the top half of my arm was burning up, and I had a hand sized crimson area above my elbow. Just nasty.


Lap three. The heavens opened. I mean really opened, torrential downpours for practically the whole lap. On the one hand, yep, it cooled me down somewhat. On the other hand, my MP3 player crapped out - I learnt later that my phone did too. Eventually the music did come back, but only at full volume. Oh well - that ain't too bad. The rain also dampened the spirits of the deer fly. Towards the end of the loop, the trail was pretty flooded with ankle deep water. Initially, I was trying to avoid them to keep my feet dry. That didn't last long, I decided the best way was to just wade through it and be damned.


Towards the end of the lap, my head started saying "you know what Jimbo, you have ran a marathon, it's pissy miserable weather, why not give it up." For the last couple of miles of the lap, I had two voices in my head. "Quit Jimbo you fool". And, "You ain't done yet Jimbo - keep going". My decision was made easy by the Frank and the folks at the aid station after the end of the lap, who very politely suggested I get my butt back out there and complete the race. It was just the motivation I needed. If y'all ever read this, thank you!


Lap four. The wonder drug combo was used at the beginning of the lap. Coke and a caffiene pill. The rain had eased off to a steady downpour - the floods on the trail dissipated, and I felt good. I was the last person going out in the lap, and as I was running, I was writing this blog in my head, "DFL > DNF >DNS" being the main topic. ("Dead f---ing last" is better than "Did not finish" is better than "Did not start"). Once I was out on the lap, and the decision had been made, I was determined to finish, and finish well. I passed a few folks, and the thing that pleased me most was that I think that this was my fastest lap of the day. That was REALLY pleasing. The "Wonder drug combo" strikes again. It really works well for me.


To end - this was a lot of fun, it really was, and I would recommend it to anyone. Frank and his crew did an excellent job, and I really had an enjoyable 8 hours and 51 minutes. I'll be back next year. There were 42 starters I think, 6 finishers, and I believe I came home in third place. 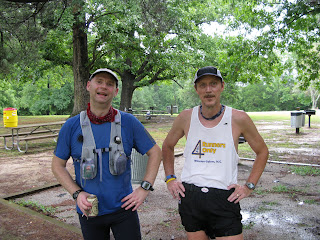 Jimbo and Steven at the end. We came in right about the same time
Posted by Jimbo