This better be the final installment - Umstead 100

Lap 6 - this time my pacer is my friend Connie - we bumped into each other on the Jordan Lake trails a little over a year ago, she introduced me to Raleigh Trail Runners, and we run a lot of miles together by the lake.

After 100k, I think is where things start to deteriorate. As much as I have ran already, I am still facing 38 miles or so. It is now all about plodding forward, and staying mentally in the game, and refuse to allow thoughts of quitting from entering my head. This is where the pacers come in, and Connie did a great job.

A couple of miles into the loop, we had a similar 'incident' to the last lap. Baby wipes. YAY!

One thing I remember is about 4 miles into it, a runner was down, he was suffering from the cold, and was asking for warm packs. Connie and I couldn't help, but thankfully a pacer from a runner behind us could help. The poor guy was really not prepared. It can get cold in NC in March, even late March. I don't think we were much above freezing. We alerted the race staff when we saw someone on a bike, and let the folks at the aid station know - they had already picked him up, I guess he was OK.

At the aid station, it was time for a dumb moment. While Connie was getting me food and drink, I sat in front of the heater and needed to do a sock change. I took my time, because I needed a bit of a break, and the heater was so wonderfully warm. Anyway, dumb ass - I cleaned my feet, reapplied Hydropel, and then promptly placed my feet right onto the ground where they got covered in sand and grit. Start again.

Heading out with new feet and a filled belly I felt somewhat rejuvenated. A couple of miles later, I did notice that there was one piece of grit in my left shoe that was starting to give me bother - I decided that I would need to sort it out at the next aid station 3 or 4 miles away. Connie thankfully suggested that I would be better off to sort it out now - she was of course right - so I found and appropriate tree stump and cleaned my feet again and empied my shoes. This is why I wear a bandana! Much better.

Another brief break while I ate a cheeseburger. I picked a new pacer - this time a volunteer pacer provided by the race. Rick did an awesome job - we managed to hold a conversation for most of the loop. I was feeling pretty crappy by this point. Nothing inparticular was wrong, I was simply beat, and was still facing a long run. Also, at this point, many of the people you run into on the out and back section are coming into finish, kinda makes you feel jealous.

Another break at the aidstation - I couldn't figure out what I wanted, I was starting to think I had taken too much salt, I was very thirsty and noticed some swelling, but I did need calories. Grapes, that's it. Rick got me a cup of grapes to eat, and they were just what I needed. Very refreshing.

On the whole this was an uneventful loop - I enjoyed getting to know Rick, he has since joined RTR, so hopefully I'll see him around at some other local runs.

Last lap. Still tired, but starting to sense that this is almost finished. New pacer, this time Blanca from the volunteer pool of pacers, and somebody else who I enjoyed getting to know. Blanca has done a few marathons and is looking to do some trail runs - she is thinking of Medoc marathon later in the year.

Not too long into this loop, daylight arrives and with it some warmth and of course a sense of accomplishment - there is no way I am not going to get done. Left right repeat. ALMOST THERE!!.

A brief pause at the aid station (remember the bad joke I warned you about??? Here it is..... " Woohoo 10K left, any fool can run 10K. My warm up may have been a little excessive though." Told you.). I took time to thank the aid station gang - really they all did such a phenomenal job, I can't thank them enough.

Time for the last stretch, I feel like there is a little wind in my sails now, and even jog some.

Up the jeep track for the last time, I thanked Blanca for the terrific job she had done, and then it was time to cross the line.

I got my buckle, it is probably one of my proudest possesions. 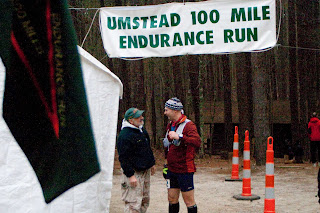 Jimbo finally getting his buckle from Joe Lugiano.

Email ThisBlogThis!Share to TwitterShare to FacebookShare to Pinterest
Labels: Umstead 100