Well, the race started fine and I had no problems leading up to the 8 mile aid station, and everything seemed to be fine at the 17 mile aid station. The course was tough, but I was getting through the miles ahead of the cut-offs.

Then about mile 21 - I noticed I had slowed down quite considerably. Next aid station was at 25 miles, and looking at the time, I had an hour to make it. The course at this point was such that I still couldn't pick up the pace. Over the next 20 minutes or so, I had only made it one more mile, I realized that I would miss the cut off at 25. Disappointed and angry with myself at first, but over the next few minutes I became at peace with it. C'est la vie. The course had one more suprise for me though. The next aid station wasn't at 25 miles, it was at 23.xx miles. I made it there with 8 minutes to spare. It was a weird feeling. 5 minutes earlier I was ready to get a ride home. And here I was at the aid station with time to spare. Well, despite feeling pretty crappy - I wasn't going to voluntarily quit! I left after downing a pint of OJ and eating some M&M's.

A mile later, I was beginning to regret not dropping. My hamstrings were cramping on every uphill, and I was physically and mentally beat. Totally and utterly fatigued. I could go back - but then I worried that the volunteers would have packed up and gone (I was one of the last through). (I have since learned that the aid station volunteers won't leave until they have word that all runners are accounteed for at the next aid station, which is a neat touch and good to know). I sat on the ground for 10 minutes trying to get a mild recovery, and decided that I would just plod on the next 9 miles and drop at 33.

Even though I had decided to stop at 33, every now and then, I would change my mind and try to move a little quicker. But then the next hill strewn with those red boulders would loom, and any enthusiasm I had built up, would get beat down again. My hamstrings continued to cramp on the uphills. Then at about 30 miles, I came across the ham radio crew, and that's where I stopped. Sat with those wonderful folks for an hour or so, rehydrated (I'm beginning to think that I didn't drink enough), and then we hiked out another 3 miles or so (oddly enough, I felt very rejuvenated after an hour's rest!) - where I was given a ride to the finish.

So there you have it. My first DNF.

What will I do differently next year? 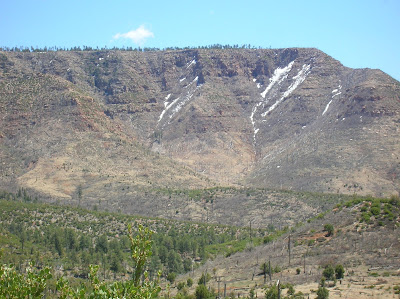 Despite the toughness of the trail, there were plenty of stunning views (yep, that is snow!) 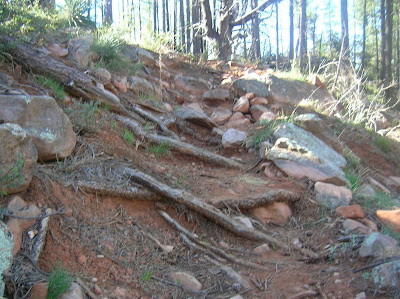 But of course - if you spent your time looking at the stunning views, you would lose your footing or trip on a piece trail like this!
Posted by Jimbo