Short Version:
Toughest 50 miler in the country
Wonderfully organized
Terrific volunteers
Rocks
More rocks
Yet more rocks
DNF
Unofficial finish in the toughest 50k in the country :)
Longer Version:
I am still getting over my first DNF - I go in cycles, I'm fine with it one moment, and next I am second guessing myself. The race was billed as the toughest 50 miler in the country - and having now done over half of the course, there is no way I will disagree with them. I fought the course - the course won.
I want to first really praise the organization from Joe Galope RD and the volunteers, it is a great event, and if you think you are capable of doing 50 tough miles, then I would have no hesitation in recommending this race. Oh, and I have already decided that I will be back next year.
"Be safe, and use common sense." "GO" - that was the pre race briefing.
So what went wrong? Me. That was what went wrong - I thought I was ready for this kind of trail, in short, I wasn't.
It was the course that got me - it is was unbelieveably difficult for me. I usually do OK on climbs - not fast by any stretch, but a good steady pace, and then I make up time on the descents. For me, this didn't work out - I couldn't get into a steady rhythm climbing, and I certainly couldn't make up any pace on the downs - the effect of rocks everywhere. There were plenty of runners who did finish - so they probably just have more confidence on the downs than I did. I need to figure out a way to practice this kind of running.
Elevation - this was the first time I had problems because of the altitude (or at least I think so). I arrived in Payson about 10 hours before the start - other runs at altitude I have done, I have had at least a day or two to get used to the lack of oxygen. Not total acclimatization for sure, but I am sure it made a difference in my own little experiment of one. For example - at the Tetons last year, I had a week in Idaho ahead of the run. That was at 5,000'. The run itself goes up to just under 9,000'. Sure in the Tetons, I knew I was up there, but at ZG, I really seemed to have problems late on - at much lower altitude too. I will be arriving at least 24 hours earlier next year.
Heat - I live in the South, hot weather is my comfort zone, and here in NC we have had plenty of toasty days already. Physiologically, I was fine, the heat didn't cause me stomach upset - but what it did do, is make me slow down. That's not unusual - I do run slower in the heat. BUT.... I needed to have planned for that slowdown though. One way was probably to have been conditioned better to have been able to take advantage of the early morning cool, and get 10 or 15 minutes further ahead by the 8 mile aid station. This would have added quite a buffer - it also would have meant that the first part of the trail, between first and second aid would have been a bit cooler. I think by following this kind of strategy, it would have taken a fair amount of pressure off of me later on, because I believe that once the brain starts thinking "I ain't gonna make that cut off", it's hard to convince yourself to push a bit harder - I did try from time to time to make up some minutes, but that just adds to the fatigue and ultimately an even slower pace.
More thoughts to come later in the week................... but enjoy these pictures 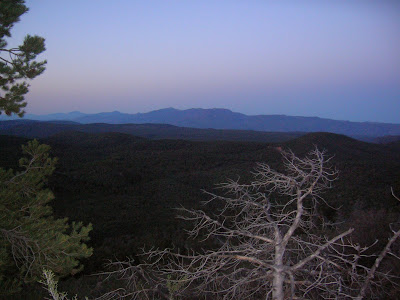 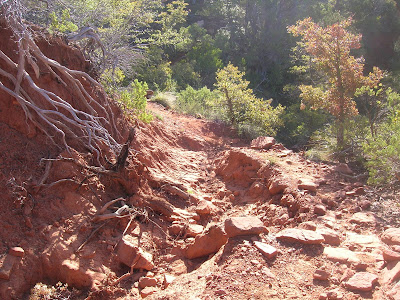 The photo doesn't quite capture how steep this down hill was. But this was not untypical terrain 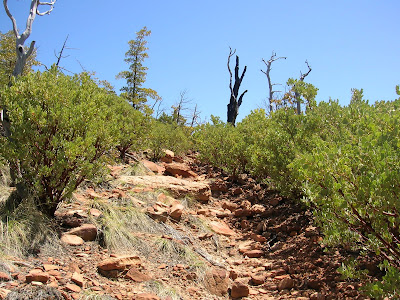 This will be my abiding memory - steep inclines, no idea how long the climb goes on for, rocks you know you will slip and trip over, and those bushes that scratch your legs to pieces. 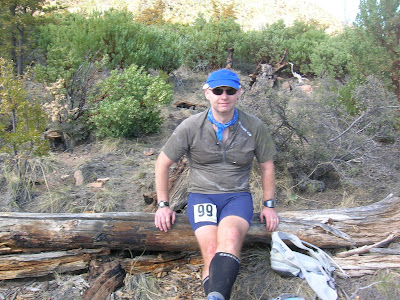 Covered in salt, trying to fake a smile - officially DNF.
Posted by Jimbo