A month or so late. Oh well.

So, one my highest highs started at the lowest of the lows.

I am of course talking about my Badwater, where I had many highs at low point, and then another high at a high point.

Earlier in the year, Meredith Murphy asked me to crew for her again. This would be my third year running at Badwater.  On the crew this year was the quiet, shy and reserved Mandy, fellow Team Awesome member Jessi and my new friend, Iliana. I had to think about it for a while. Well, until I realized the “chick to Jimbo” ratio including  Meredith was 4-1.

A strange thing happened on the way to Badwater. The plane to Vegas had onboard Wi-Fi. While Facebooking, up pops a friend request. It turns out that I was on the same plane as someone who was crewing for Ethel Cook who was on Meredith’s crew last year. Not only was Rosie on Ethel’s crew, remember this post? Rosie happened to be “Tumbling Rosie” – the woman who took a fall and hurt her nose. So there I am, enjoying a three way online chat with not only Rosie, but Tammy as well, who is also on Ethel’s crew and is on a different flight to Vegas. Technology is as amazing as the smallness of the running world. So that was actually a high point while high.

This year, Meredith had elected to do the crew differently – one crew, with one shift for the whole race. Personally, I think this is the way to go. Yeah, we get tired, very tired, but you tend to get into a rhythm, and I am sure that is better for the runner without having to deal with the crew shift changes. Downside though is how tiring it is – you can lose focus.

The lowest point in the western hemisphere is Badwater. I got a real high there when Meredith and about 29 other runners started their 135 mile journey. As a crew, we quickly got into a rhythm. Drive a mile or two, wait for a while. Offer food, fluids, spray downs and ice. And so it went. 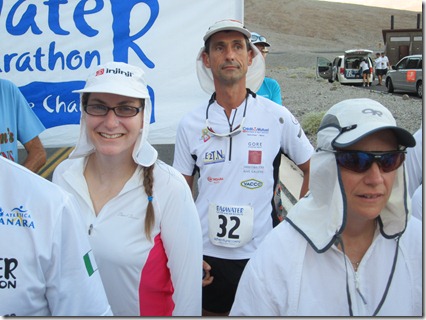 Meredith and Ethel just before the start

Last year Meredith started having a pacer at Furnace Creek, mile 17. This year she she was trucking along just fine on her own until about 35-36 miles or so, when she started complaining of shortness of breath, and needed a break. It dawned on me after a few minutes that she was overheating. Ice in Ziploc bags did the trick and she cooled down quickly.  A couple of crew lessons here – the overheating can creep up on the runner quite quickly, Meredith had not wanted spraying with ice water other than on her arms for quite a while up to that point. I think that’s why she overheated. The lesson for me next time I crew is that I really should just spray anyway.

At that point, I started pacing, and would continue pacing to a couple of miles past the summit of Townes Pass. Now then, let’s talk about the climb up Townes Pass. [right then, if you do not like bad language, and swearing, just skip the next paragraph.

[swearing over for now] That climb is brutal. The wind is in your face, bone dry, hot, dusty and hot. The climb is relentless – over 16 miles, 5000 ft to the summit. The best description I have heard is that it is “soul-sucking”. To make matters worse, it doesn’t actually look like you are going up hill. it looks like you trudging along a flat road. But of course our calf muscles feel it, you notice the effort of going up hill. But it looks flat! It totally screws with your mind – until you look behind you and you can see the valley below. It is a very weird optical illusion. All you can do is LOL at the hill and say WTF. I can see why Meredith wanted me to experience that climb. It is tough, and it is that sort of thing that makes you realize just how tough Badwater is. 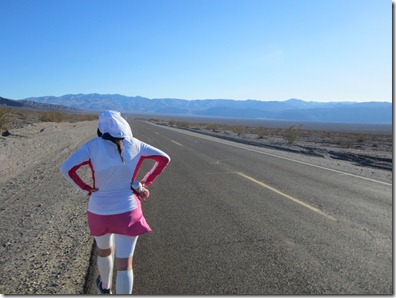 See how flat it looks? The beginning of the climb up Townes Pass

Most of the rest of the run was uneventful really. This year Meredith’s stomach stayed in check and she managed to keep plodding away. The landmarks came and went, Panamint, Poo-Point, Father Crowley’s, the 100 mile point and on into Lone Pine. 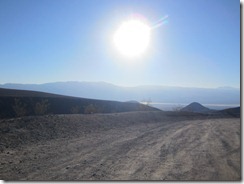 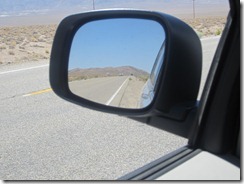 But is it art? 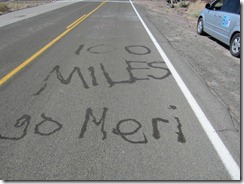 Meredith ideally wanted to beat last year’s time (46.22). A hard climb up Townes, plus some longer than planned stops after the 100 mile mark slowly made that hard to reach. Finishing under 48 hours though was never in doubt. By the time the climb up to Whitney Portals had started, we knew that last years time was going to be out of reach, but we would finish with about an hour to spare. So with a tiny bit of light showing in the eastern sky, we finished Badwater. 47:08. DFL never felt so good! 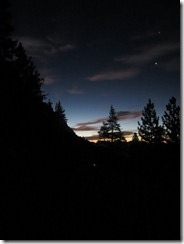 Love this shot! Our third sunrise on the road! 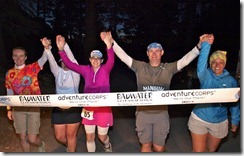 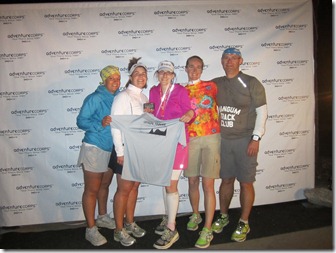 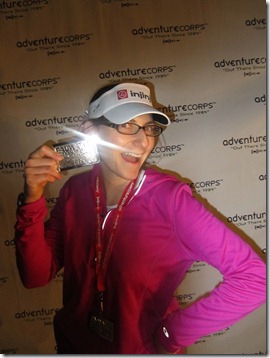 Meredith looking like she had just finished a 5K! 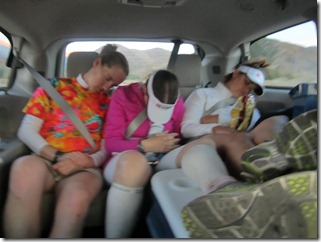 Awwww This is not posed! Driving down the mountain, Iliana got this great picture of Jessi, Meredith and Mandy. After 3 sunrises though and a 135 mile journey, a quick power nap is perfectly reasonable. 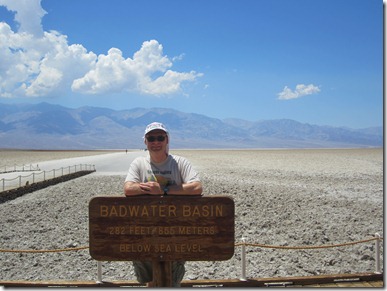 So, my third Badwater crewing experience is in the books. Is there a Badwater run in my future? Hmmm. Had you asked me that after my first time crewing, I would have said “hell no!”

After my second year of crewing – I think my response would have “Doubt it, but you never know”

So, my upcoming move probably make logistics easier, and with perhaps another year or two of crewing under my belt (it really is a blast – tough work, but an absolute blast), some saving up – well, I think there could well be a Badwater in my future.