Random Musing #1
Some people are just born a-holes. It is one thing to jump in front of me at the check in line, it's another to to blank me - not even smile or acknowledge the wave and greeting I gave you every single time we passed. You could at least nod your head. Maybe your DNF was karma coming back to haunt you.
The plan
I acknowledge that I am a geek for this kind of stuff, but one of the most useful things I had was a 3 x 5 index card with my predicted splits for a 28 hour finish - I also noted on this card the "actual" splits for a 29 hour finisher. The theory being that if I found myself getting behind those splits, then I would know that I needed to step it up a bit. Conversely, if I found myself ahead of the 28 hour splits, I could ease up, and maybe take a break or two 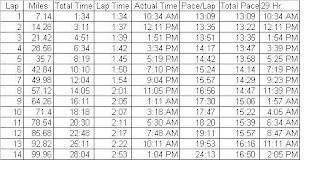 Compare the calculated "actual time" column to my splits on the day below.

Like I said - I am a geek for this kind of stuff - but it was always very useful to know how I was doing at any time - I referred to the card often. I will most certainly do something similar for future runs

Fruit and a boost shake for breakfast, plus of course coffee. During the run, most of my calories came from Clip during the day, and Amino at night. That was supplemented with the Jimbo turkey slider burrito from my own supplies, and peanut M&M's and trail mix - which suprisingly, I didn't eat much of - to date, this has been a taple of every ultra I have ran.

From the aid station, the main meal I had was a chicken pasta dish, which was heaven sent by the time I ate it. In addition to that, my friend Chris who was manning the turnaround aid station through the night, cooked for me a special treat of a grilled cheese sandwich, which was delicious.

The only time my stomach rebelled was after I ate half a banana - no puking, but I did feel nauseous for 15 minutes or so. One thing that went down well was orange slices, in fact, towards the end, they were probably my only source of calories.

The one are that I let myself down, was late in the race, once the sun had returned, I am now certain that I didn't eat enough. All I can remember eating was some orange slices, some Clip, and 1 gel. I probably had no more than 500 calories. That will explain the lack of energy for my last lap. It didn't cross my mind at the time, I put my lethargy down to having just completed 93 miles or so. I'm not sure why I didn't eat really, it's not like my stomach was rebelling - I just didn't feel like eating, I wasn't hungry at all. In this instance, I shouldn't have listened to my body!

The "no shit Sherlock" award goes to this educational picture that was at about the 2.25 mile point. 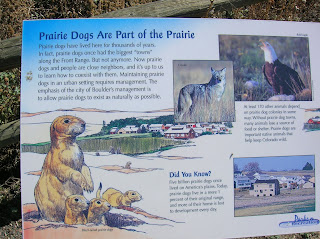 "Prairie Dogs are part of the Prairie" - you don't say!

Sometime around the 25 26 mile mark, something went wrong with my left achilles, basically, every time I power walked, an excruciating pain shot up from my achilles tendon and through my calf. The strange thing was, it didn't hurt when I jogged. So, I had two options - limp slowly, or jog. When I got to the main base, I changed into my road shoes to see if that made a difference - it didn't, if anything, it made it worse, so I changed back after I had done the parking lot loop. So I took two tylenol, and hoped to tough it out. I have to admit to being worried that this would end it for me. At about mile 35, the pain went away, almost as suddenly as it appeared - the Tylenol? - No idea, may have been, the pain went probably two hours after I took the pills.

It was good to be able to walk strongly again. 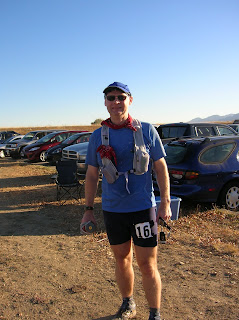