I am writing this report at several thousand feet, having just took off from Denver. This is a good opportunity to bring up my first ‘top tip’ – “Don’t travel within a day of a 100 mile foot race”. It hurts.

I am currently listening to the song that was playing when I crossed the finish line, “Resistance” by Muse – I have loved the band and their music for a long time, but I will never be able to listen to this song again without remembering my first 100 mile finish.

Where to start…….. the beginning I suppose. I landed in Denver on Thursday afternoon, and checked into a hotel near to the airport. As luck would have it, there was a Wal-Mart within a mile. Perfect

Last minute supplies included the ingredients for “Jimbo’s Turkey Slider Burritos”, which was to be my staple food - flour tortillas, grated cheese, sliced turkey and avocado. In hindsight, next time, I will also slap some mayo onto them, they felt a bit dry late in the day.

Friday was spent actually making the burritos, driving to Boulder to find the reservoir, and also meeting with Karl King to pick up some Clip sportsdrink, and hanging out in the pool/hot tub.

I ate minimal solids – carbo loading the day before a run has always caused problems. Other than fruit for breakfast, a Jimbo Turkey Slider Burrito for lunch, my only other source of calories was Boost protein shakes. I had no stomach issues at all during the race, and no need for any sprints to find the Port-a-Potty (or even worse, a tree, because they were pretty sparse.) 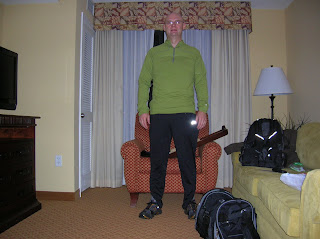 Jimbo in the hotel on race day morning

On race day, I got to the start with plenty of time to check in, get my number pinned on my shorts, etc. I set the rental car up as my own personal aid-station, I had a great parking spot, not 50’ from the start/finish line.

The start was uneventful – for the first mile or so, we could several balloons taking off into the beautiful clear blue Colorado sky. 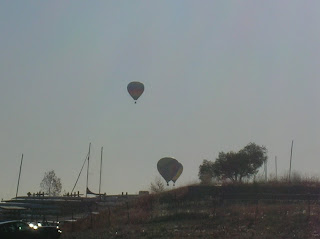 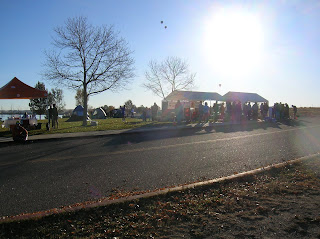 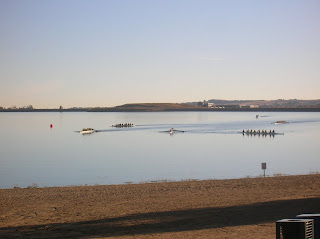 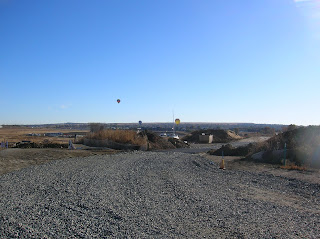 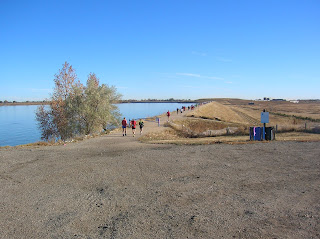 The view from the back

After the fist mile, I was dead last, and I am proud of it! :)
Anyway, rather than do a lap by lap recount, I will do a series of random musings and thoughts…………

The course is a 7.14 mile out and back. It is kind of like a lollipop with a very long stick. The first part is a loop around the parking lot, then still on asphalt with a slight up hill we head towards the dam. From there the surface was a densely packed gravel – very easy footing, occasionally there were some small rocks packed in with the gravel (they became huge boulders as I stumbled on them from time to time during the night). Just as we would start the dam portion, we would pass one mile.

The dam was in two parts, with some 90 degree turns in between and some small (very small) inclines. The end of the second part of the dam was 2 miles.

The next mile was easy wide trail, with some small gentle rolling hills, which took us to the ‘canal crossing’, which was a narrow bridge. 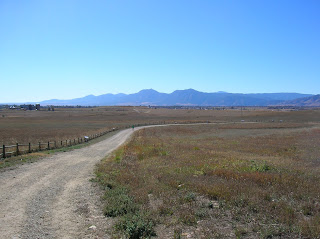 The gentle hills at about 2.5 miles - looking back toward the start
Near to the canal were signs that would promise “Certain Death” – one was right next to the trail, there seemed to be a delicious irony that we would pass this sign 28 times during the 100 miles. 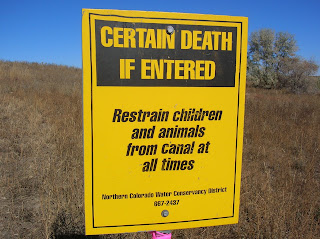 With each lap, the "Certain Death" seemed to get a little closer :)

After the bridge, the trail became a bit narrower, and the hills seemed a little steeper and longer. By the end of the run, they had become fully fledged foothills of the Rockies. That last half mile or so took us to the half way aid station, where we turned around and followed the trail back to the start. 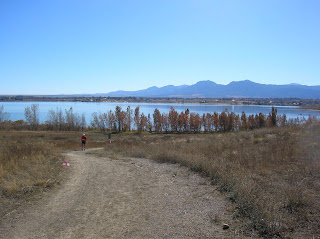 The longest, steepest climb - it wasn't much, but got steeper each lap

Email ThisBlogThis!Share to TwitterShare to FacebookShare to Pinterest
Labels: Boulder 100