The night time portion of the race was hands down my favorite part of the race. It was a long 12 hours or so, but really, it was thoroughly enjoyable - probably because nothing went wrong. The temperature was right, there was no wind, running with "Pacer Steph" for a couple of hours or so was a great experience, Chris, Kari and the rest of the turn-around aid station gang kept me fed and watered well, and kept my spirits high. Everything went right. 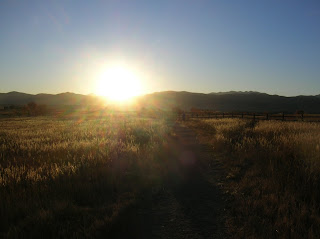 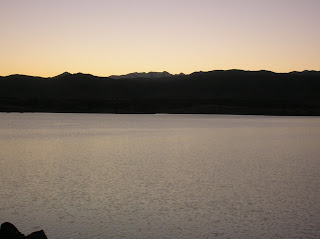 Once the sun went down, the park emptied out of local day users very quickly. Although I missed saying hi to their dogs, and watching them play, I felt a certain amount of peace (plus there was the advantage that I didn't have to worry about where I went for a pee!).

Soon after the sunset, it became apparent that unless anything went wrong, I would beat my PR for 50 miles, which was 11:48. This wasn't something I was expecting at all - and certainly nothing I was pushing for - but obviously something that delighted me. The time for 50 was 11:26. Wow. I took a 10 minute or so break at that point for a change of socks and a bite to eat.

An hour or so later after I set out from the base, I was back at the turnaround aid station - they had done a great job of decorating 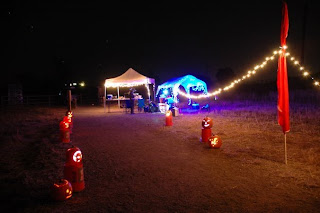 It was then that I met up with my pacer Steph. She was fantastic company. Unfortunately, she had a class the next morning so couldn't keep me company past midnight, but the two-and-a-bit hours we hung out together was definitely one of the highlights of the race. We chatted a lot about her stellar ultra career, and my long term ultra ambitions, my short term ultra ambition (which was basically "finish alive sometime tomorrow"). The time flew by, and it seemed way to soon, but we were back at the turnaround, a little before midnight, and I had to bid farewell to Steph. Thanks Steph, I look forward to returning the favor one day. 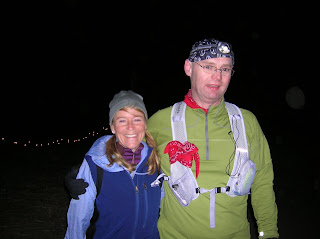 Jimbo (not looking at camera!) and Pacer Steph

As I left the aid station (I was now at about 100K), although I felt alone for a while, I managed to lose myself in whatever was playing in my headphones and keep moving forward.

My splits through the night were mainly very steady a little over two hours. I would usually take a two or three minute break at the end of each lap, to take the weight off of my feet and grab a bite to eat (the highlight being the grilled cheese at 3 or 4 am - Thanks Chris!). My longest break was at 7am or so when I sat for 15 minutes.

So that was the night, good running, steady pace, great company, good aid, loud music, no moon. In a way, it was a shame it couldn't have remained dark for longer!

Lesson learned here Jimbo - when you go off trail for a pee, make sure you don't walk through the type of brush that has pods/seeds/whatever those things that stick all over your shoes, socks and legs! 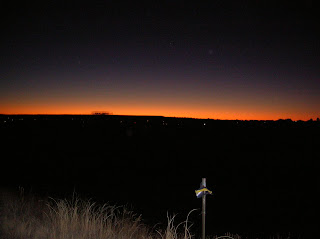 As much as I enjoyed the night, there is something something special about sunrise though! Other than the last few yards of the race, I think that was about the only thing I enjoyed about the rest of the race. Fatigue was starting to kick in. At dawn, I think I was at around 83 miles - and 17 miles to go, it really really seems a long way. I know I stopped eating at this point, and it is also probably fair to say that I slowed down the fluid intake as well. I am now of course thinking of nothing but finishing. I want it over and done with. Not to mention of course that there is a fair amount of pain by this point - yep, when I set out on lap 13, that was my low point.
It was also pretty lonely out there - I could handle that at night, but for some reason, after dawn, it bothered me. Many of the runners had dropped, some 100 milers had finished already, and the 24 hour runners either done or soon to be done, and it was a little too early for the dog walkers to be out. I had a hard time that lap (I did have a cup of coffee to start it off though which did help a bit). But, there was only one way I was going to finish this thing - and that was by actually doing it, so I just plodded on. It also started to get warm, and I was still wearing my long sleeve top. The weather had more trick - it started to get windy, a very dry wind that was probably sucking more moisture out of me than I was bringing on board.

The lap eventually ended - at the same time, the 24 hour racers were receiving their awards, so they sent me off on my last lap with a few "Go Jimbo's", which was well appreciated. I didn't take a break, just changed into a short sleeved shirt (I actually chose the race shirt - there was no way I was not going to finish now, so I didn't feel like I had violated any of my own superstions). That being said, I can now understand why people do drop so late in a race, I was now at mile 93, and I was absolutely only moving forward because of my determination to finish. If the will to finish ever went, then I really think I would would have stopped. So I just kept plodding forward, but getting slower.

The dogs and their people were back out now, so that gave me something to think about. Most of the dogs were off leash, and it did strike me how well they all got on, I saw dozens of dogs, all breeds, and 90% off leash, and none of them fighting. Just wish my two mutts were as trustworthy! This is where the little hills near to the turn around aid station were now full mountains - I walked up one sideways my quads were hurting so much.

I got to the mid way aid station, and thanked Ashley and Jeremy for their great support, turned around and headed out on the last leg.

I could smell the finish by now, and the plodding would continue. I did enjoy the look on one lady's face - she asked me what was going on, "hundred mile race, and I am on 97", the look was priceless - a combination of disbelief and awe I think. 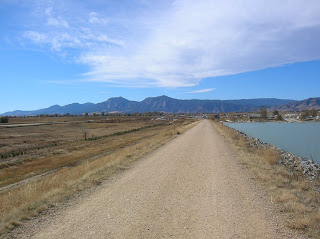 The view towards the finish with 1.25 miles to go

The finish was getting closer, and the one thing that I was disappointed about was the fact that I didn't 'enjoy' the last mile, I expected to be on some sort of a high - but you know, it was just like the previous few miles - just another painful obstacle of 5280' between me and the finish.

As I went out on the parking lot loop, I gave my camera to the guys at the main aid station so they could get a couple of finish line shots. I am now finally starting to feel a little overwhelmed with it all, and amazed at the accomplisment, and realizing just how far a hundred freakin' miles is! 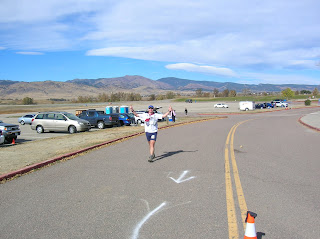 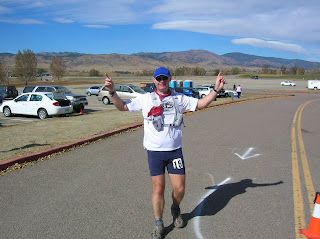