First off, I have to comment on what a fabulously well organized run this was. This race is absolutely a "keeper", I enjoyed everything about it. The location was also great - just 30 minutes or so from home.

The course was a 4.47 mile loop on mainly technical single track trails. Some of the terrain was easy on the foot pinestraw covered sand, but most of the loop was fairly root covered. Not much of it was flat. 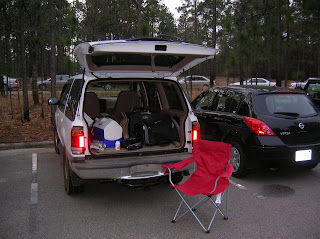 I arrived an hour before the start, had plenty of time for a coffee in the heated auditorium, and set up the car as my own mini-aid station, just over the way from "Mrs. Doom's all you can eat buffet" 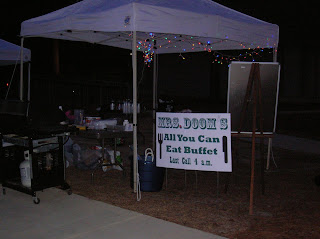 The race started at 8, and I immediately fell in love with the course. It is very similar to where I train by Jordan Lake. 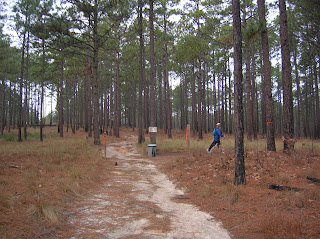 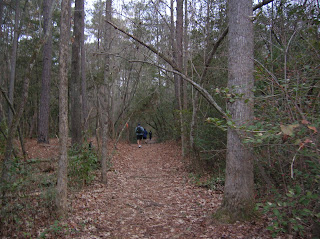 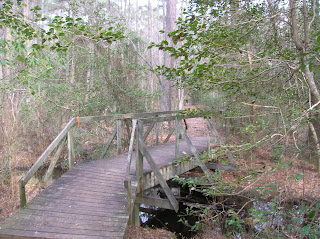 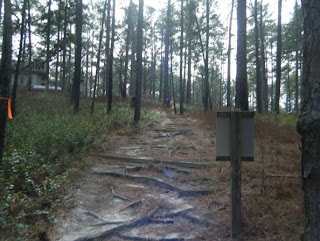 I ran smartly, ate and drank regularly and took occasional sit down breaks (the longest was about 20 minutes when I had to "check-in" for my flight the next day at exactly at 2:25pm - if you have ever flown Southwest before, you will realize the importance of getting an "A" seat - I would not have enjoyed getting the middle seat to the west coast just a few hours after finishing a 100K run.... but still, that was what my Blackberry was designed for, and it was fairly painless, and I did enjoy the break).

Sometime on my 11th Lap, I caught up with Ray K, a veteran of several hundred Ultras over the last two or three decades, by then, I knew that I would enjoy the company, so I hung out with Ray, mainly walking, until the end of the race, listening to stories, and listening to him singing his Beatles repertoire! I thoroughly enjoyed those last few laps, Ray is a great character and terrific company. The only dampener was that it did start raining, and gradually got heavier and heavier over the last 3 laps, and it was quite a soaking rain towards the end and was pretty uncomfortable.

So, a heartfelt thanks to Marie Lewis, the RD for putting it all together. In addition, a big shout out to all of Marie's friends and family who all did an outstanding job volunteering - Mrs Doom's all you can eat buffet was brilliant, and the service was superb. 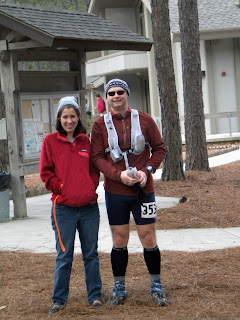 Jimbo and Marie after my first lap