I took probably around 10-15 minutes, just taking the weight off of my feet, changing shoes (to the new Mizuno’s), and doing the usual with the water bottle. I also found my travel mug, which still had some barely warm coffee in it; a little caffeine would do no harm.

I was hurting now, and as well as the physical pain, the mental part was kicking in. Getting up and getting started was tough. I needed a boost.

At the aid station, I recognized Charles from the Raleigh Trail Runners – although we only had a 30 second conversation; that was the boost I needed. So of I went with a handful of trail mix, some M&M’s and some banana.

Just as I got going, I heard “JIMBO!!” Yay, there was Frankie just behind me. Also, Tammy was just ahead of us. Frankie asked her to take a picture of “me and my buddy Jimbo”. With arms around each other’s shoulder, the picture was taken. Less than a second later, (we were just ahead of the Jeep trail where spectator traffic comes and goes to the parking areas), Jess comes around the corner. Perfect timing, there’s me getting photographed with my arms around the 'blond chick' in full view of my wife! 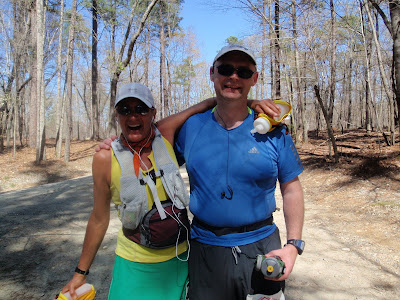 Here's the photo, hope Tammy doesn't mind me grabbing it off of her website 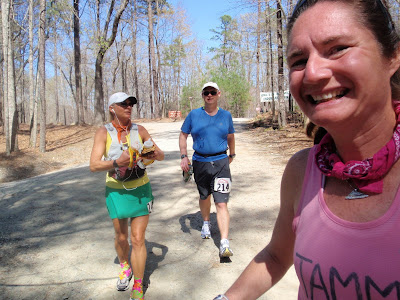 I took a few minutes to get going. Tammy runs ahead, and Frankie and I run together for 2.5 to 3 miles or so. We were both struggling with the mental arithmetic to calculate the pace I needed in order to finish in under 12 hours. I guess the brain gets fried too. I was beat, physically and mentally. Eventually we figured a 15 minute/mile pace would get me to the finish at 11:54. Easier said than done at this point. I was boosted by passing through 40 miles - 80% done had a great ring to it, as did only having a single digit number of miles to go.

Dave James lapped us again; he was on 65 miles, 25 miles ahead of me. What an amazing athlete.
Frankie had to make a pitstop, so the next mile or so I was on my own, until she caught up with me on the long hill between mile 4 and 5. There was no way at this point I could keep up with her. I didn’t see her again other than a brief “hello” in AS#2 until after the race.

The chafing was getting worse, but I had a plan. I had these little packets of “First Aid Cream, with Pain Relief”. That’ll do, I thought. Except the pain relief doesn’t kick in until after several minutes of agonizing stinging. At least it took my mind off of my quads for a while I suppose.

I needed to pee – I noticed on Tammy’s blog that she wrote, “appropriately far from the race course was inversely proportional to the time I spent on the course!” Isn’t that the truth, I found the nearest tree, and let it all hang out (actually that is not strictly true, because it would appear that running 40+ miles has a very similar effect on men as ice baths, so “all” maybe a slight exaggeration.

There’s the dog pile again. This lap’s 30 seconds were wasted thinking, “Hey, I see you’re surrounded by flies now you piece of crap you. Oh, and good riddance, I will never see you again. See ya turd!”

Into AS#2, did the usual with the water bottles, lubed up one more time. I had some potato soup which really helped pick me up, and I was off again

As I was leaving, Tammy was having a conversation with her husband, and as I was passing, she told me that I was entering, “the victory five miles”, and I should enjoy it. That was all I needed to hear. I got a huge lift. 5 miles left, just 5 lousy miles. I can run 5 miles in my sleep.

The sawtooth 79 hurt even more now, more on the downs. But that was just physical – mentally, I was strong now.

I figured at 4 miles to go, if I maintained a 15 minute pace, I would get in less than 12 hours with 10 minutes to spare, and I called Jess with my prediction, she asked how I was feeling, “on top of the world”.

Before I know it, I was at Graylin for the last time – 3 miles to go, and at least one mile of it is a nice gentle downhill slope.

Tammy caught up with me when I had a mile left, we chatted briefly as she was passing, more words of encouragement, and this time words of congratulations now. I was on an unbelievable high.

Turning right onto the Jeep trail for the last time, I started to get emotional, and I am not ashamed to admit that there were more than a few tears as people were clapping me home. Good job I was wearing sunglasses! Just before the finish line I caught sight of Jess and our friends Shelly and Duane with their cameras at the ready.

I even had enough energy to put in a little sprint to the finish.

“214 IS DONE”, I shouted as I crossed the line. The people at the finish line congratulated me, and I was on top of the world. My time (according to the Garmin) was 11:48:40. Absolutely thrilled with the time, and thrilled with the whole experience

My name is Jim, and I am an Ultramarathoner.
Posted by Jimbo