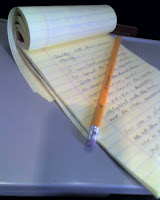 I was travelling across the country today, and I wrote longhand 30 pages of notes about the day. I had so much to remember, normally within a few days of the race, I forget everything, so this time, I wrote it all down. I will type these notes up lap by lap over the next few days.

Before the start, I had a game plan, I was thinking 11:30 min/mile, and add a minute each lap. I know that I was comfortable at 9 min/mile over short distances, and ran the first 18 miles of my last marathon at 10 min/mile, so I figured 11:30 would be a good pace to start (I did plenty of training runs at 11 min/mile), so I felt that would be a good comfortable pace that could be sustained.

That plan went out the window as soon as I was standing at the start line; I looked around and saw all these seasoned ultra runners surrounding me. My plan immediately switched to “do what they do”.

So headlight on, and we’re off. After about 100 yds or so there was a very slight incline, perfectly manageable at the pace I was going, however, many of those folks who knew what they were doing started to walk and that is what I did. And that’s how it went, jog on the flat and the downhill sections and walk the inclines – even the baby inclines. I was very happy at that pace.

Around mile 4, I needed to pee, even though it was still barely dawn, I still felt I should venture deep into the woods where I wouldn't be noticed - no idea why, it wasn't like I was the only one who uses the outdoor facilities!

The hill between mile 4 and 5 was uneventful other than the first spotting of the soon to be famous dog pile – still fresh and glistening. The thirty seconds of time wasted on this lap were, “I really wish people would pick up after their dogs”, and “the poor puppy has eaten something that disagreed with it”.

Into AS #2 (aid station 2). Refill water bottle, add a hammer gel to the water, take off long sleeved shirt, exchange regular glasses for prescription sunglasses and off I go again with a handful of M&M’s and some peanuts.

After the aid station, the “sawtooth 79” section started. So called because between miles 7 and 9, there are a lot of hills many of them beasts, mostly short hills, but for the whole two miles, there were hardly any flat spots at all.

I really enjoyed coming to the end of that section so I could get to the long trot down Graylin trail. Getting to that T-junction, and seeing that street sign really gave me a lift, because I felt that the worst was over, and knew I was facing a long downhill stretch followed by the last couple of miles of trail – but this time, you have people in the race coming towards you, and a few people saying “good job” does no harm whatsoever.